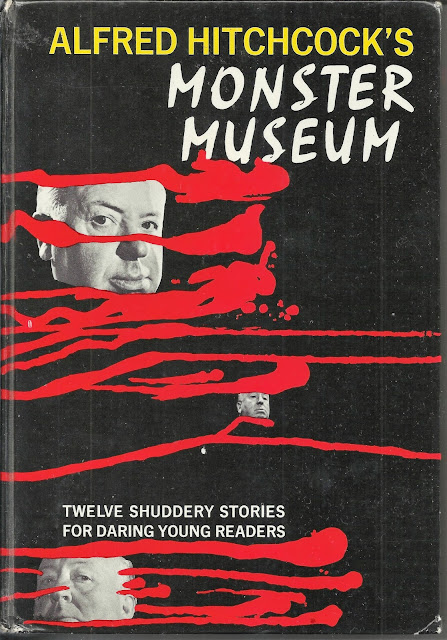 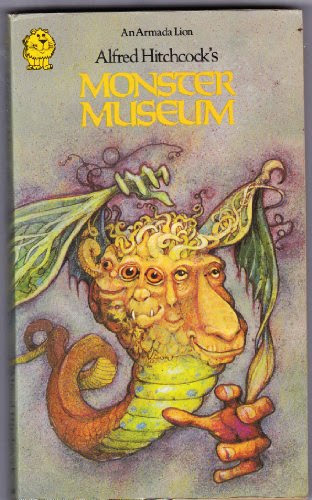 “Monster Museum” is my favourite of the three “Alfred Hitchcock” young reader’s horror anthologies that came out in the 1960s when I was just starting grade school. I’m still amazed to this very day that they got away with peddling such grizzly fare to little kids. Not that you’ll ever see me complaining.  I think that simply fact is that horror stories being offered to children was underneath any sort of PC radar that might have existed back then. There are some seriously grisly stories in this collection. Two tales deal with the probable end of the world, three with grisly agonizing deaths and one with child abuse. Those are some pretty heavy themes for a ten your old to wrap their mind around. Of course there’s nothing unusual when you realize that the stories are all pulp magazine reprints selected by Robert Arthur. All of these tales originally appeared in such magazines as Blue book, Fantastic and Weird Tales. Not a single one of them was written with children in mind. I’m extremely happy though that Robert Arthur and the folks at Random house decided that these stories were just the thing to get youngsters interested in reading. I know that these Alfred Hitchcock horror anthologies changed my life by turning me into a life long fan of the macabre.
Robert Arthur is probably the most read, but least known or appreciated anthologist of the 20th century. He was responsible for almost all of the Alfred Hitchcock anthologies up till the middle 1970s. He was also a fine writer of mystery and horror. His most famous novels have to be the firsts 20 or so books in the “Three Investigator” series that was released under the Alfred Hitchcock by-line.
Now let’s take a look at a few of the stories that left such an impression on me that I haven’t forgotten them even after more than 41 years.

Slime by Joseph Payne Brennan
Mr. Brennan was one of the last great “Weird Tales” authors to arise during the magazines final years of its first incarnation. “Slime” is a wonderfully gory and chilling story of a living mass of slime, which due to a massive undersea earth quake, gets washed up on a New England beach only to wreck death and havoc on a small community before being roasted alive by a national guardsman wielding a flamethrower. Reading about hunters, boyfriends and hobos getting ingested alive in the most horrible manner imaginable makes this an excellent bedtime reading for small children. God bless you Mr. Arthur! I did feel sorry for one particular dog though.

“The Man who sold Rope to the Gnoles” by Idris Seabright (Margaret St. Clair)

A rope salesman tries something that no other salesman before him ever succeeded at. He decides to sell rope to the Gnoles. The Gnoles are a race of gnome like beings. They are small in stature, tentacled and possessing jewelled eyes. It turns out that the Gnoles eat flesh and don’t like being cheated. The rope peddler doesn’t know this and goes about swindling the Gnoles to his regret. He is bound with his own samples, taken prisoner, put in the pens, fattened and slaughtered ( without being tortured) in the most humane manner.  The story is told in such a gleefully low key manner that makes it’s ending all the more horrible. I go back and re-read this one every few years.
Mrs. Sinclair was one of Weird Tales magazine’s most popular writers during its later years. She used the “Seabright” pseudonym when selling stories to other magazines.

“Doomsday” has to be the first ant oriented horror story that I can remember reading. IA young and ambitious Lepidopterist is underway in the Amazon Basin looking for one of the worlds most valuable butterflies. He is contacted by a poor farmer from the interior who promise the young man all the butterflies and cocoons he wants in exchange for 50 head of cattle to be shipped upriver to the farmer’s small parcel of land lying between the river and the jungle’s edge.  To seal the deal the farmer even leaves a large amount of gold nuggets behind as collateral. The young Lepidopterist puzzled by the whole situation tells the farmer that with so much money he can buy all the cattle he needs with out also having to search for butterflies and cocoons. The farmer says he can’t stay away from his farm for such a length of time needed to travel down river to make the purchase on his own. The young scientist agrees to assist him. A few days later he visits the farmer’s small piece of land. Anyways it turns out that a colony of dreaded Army ants have finally become sentient and are using the farmer to assist them in obtaining enough food to be able to leave the jungle for the wider world outside.
This was written when the theory of “Hive Minds” was first publicized and uses this theory in a very effective manner. The story is genuinely frightening in its implications.  And once more it’s great to consider what they were thinking when they decided to add this one to a children’s anthology. You have various farm animals and a family getting eaten alive by ants before the story is over.  This is another masterpiece of “grue” chosen by Mr. Robert Arthur. Bravo Robert!

“Desrick” is the first “Silver John/John the Balladeer” that I ever read. Silver john was a balladeer who wandered the back ways of Appalachian North Carolina. s always coming to the assistance of the mountain folk who were being threatened by various supernatural entities and dangers. To combat these evils John would use his belief in God and his own knowledge of white magic. These have to be some of the most beautifully written fantasy/horror tales that have ever been written.  This particular story deals with disbelief, arrogance, greed, unrequited love and revenge, with some really cool Appalachian monsters thrown in.
These stories are still in print, so go to Amazon and buy the collection “Who Fears the Devil?”. You be glad that you did.

“Homecoming” has to be one of Mr. Bradbury’s most famous stories. It is also the greatest Halloween story ever written. Did you know that the “Family” is also the inspiration for “The Addams Family”? Well now you do!
Timothy is the only mundane/mortal member in a family of immortal, but completely human in their own way, family of monsters. It’s Halloween and the “Family’s” once in a hundred years reunion is being held at timothy’s family house. The story describes Timothy’s excitement over the upcoming festival and also his sadness at being an outsider within his own family, and one who is doomed to die a mortal death one day. This story captures the feeling and spirit of Halloween and the autumn season. It’s spooky and bitter sweet. Just like many of the best childhood memories are.

“Monster Museum” is a wonderful collection of stories culled from the pulps, by a master anthologist, which is by no means “just for young readers”. It’s fairly easy to find at affordable prices on EBay of Abebooks. So please do yourself a big favour and look it up.  I have to point out that only the hardback Random House edition has the monumentally cool interior art by Earl a. Mayan.

Take care and thanks for stopping by.
Doug