“Wolfshead” by Robert E.Howard is our book this week! I lucked out big time on Ebay this past week and snagged an unread copy of the 1979 Ballantine edition with the stunning “PaulLehr” cover. And I won it for a measly €1.00! That’s $1.30 for you civilians. I had this edition back in HS and this is to my knowledge the only horror cover that Paul Lehr ever did. Just as “Richard Powers” dominated SF paperback art during the late 50s to middle 60s, it was Paul Lehr who picked up the reins from the middle 60s to later 70s. And Mr. Lehr’s art just is a recognizable and in my opinion just as iconic as Richard Power’s work. Personally, I’m a much bigger fan of Lehr than I am of Powers. Where as I find Powers cover art to be interesting in a jarring way I find Lehr’s covers to be much more beautiful. I’m just can’t get enough his bubble buildings/cities with those mobs of tiny people everywhere.

So now back to “Wolfshead”. 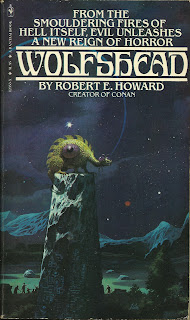 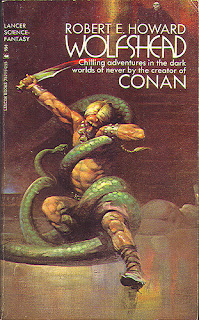 I consider this to definitely be a “must have” REH collection. 4 of these stories are REH at his very best. This guy wrote with a passion that has rarely been topped. “Restraint” was not in Mr. Howard’s vocabulary. If you want to know more about REH Fandom, them go on over the the REH/Conan board and check things out!
“The Black Stone” is the best of REH’s  Lovecraft inspired stories. A guy is travelling Hungary off the beaten path following up on old legends. He spends the night near a “haunted monolith” to see if it is haunted. Well, it is. Where this differs from a typical HPL story is the in Howard’s world the Narrators/Heroes don’t go insane. They might freak out a little bit, but still manage to stay sane and not wet their pants. This one gets a wee bit kinky also. Which let’s you know that HPL didn’t pen it.

Now if you’ll please excuse me for a moment, I have to go smoke a cigarette.

“The Valley of the Worm” is one of Howard’s “James Allison” reincarnation stories. This time he remembers a past life from before the dawn of known history. This is an excellent “Sword&Sorcery” story featuring his beloved “AeSir” and “Picts”. Aesir are REH’s proto Aryans and the “Picts” are his swarthy bowlegged little ass-kickers. “Valley of the Worm” deals with the “true” story behind allo f the ancient hero legends. The Aesir after wandering halfway around the worls wan’t to settle down for a while in a valley they have entered. The local Pict tribe warns them off. They don’t listen and get gobble up by something that comes up out of a huge cistern in some millennia old/pre-human ruins. The young warrior Niord(Allison) decides to put an end to this tom-foolery and kill the “worm”. I won’t say more. You have to read it to belive it! AWSOME it is!

“Wolfshead” is the second REH story dealing with Msr.De Montour who happens to suffer from extremely hairy palms. Yep, he’s a werewolf. Basically a Lycanthrope friend is vacationing (several hundred years ago.) g in a huge French Castle down Africa way. What starts out as a kind of Agatha Christie locked room mystery turns into a full blown native uprising where a werewolf hero goes all ape/wolf-shit and single handedly takes on a whole mass of pissed off African warriors. This is (IMHO) an incredibly stupid story. BUT, one that is so insanely over the top as only Robert E. Howard can write them that it is one of my favourites.

Now to go on a side note: Have you ever noticed that most of these old adventure stories basically have same set up? Some white guy is somewhere where basically white guys don’t have any business being? And that they are either
1. Trying to steal something (usually from dead people)
or
2: Trying to be the boss of the non-white people who were there first.

No wonder the locals always seem to have a serious case of the ass. Anyways I watched (much to my shame) “2012” a few weeks ago on DVD and really hated the film. What pissed me off the most was the ending. I don’t want to spoil it for those of you who haven’t seen it, but the world ends and 99% everyone dies! Everyone that is, except for Africa. Africa makes it through in one piece. So you just know that all these African folks are probably wiping their brows, clapping each other on the back and “high-fiving” each other over their extreme good luck. You just imagine it that way. So who in the hell come sailing over the horizon then? Just 400,000 of the world’s wealthiest jerks with an army of Chinese labourers/slaves, that’s who. And you know damned well that these 0,1% of the 1%ers didn’t just have these Arks filled with caviar and art. They’re probably armed to the teeth! This completely ruins the story for me. I was kind of hoping that when they disembarked from the Arks they would be met by the “Welcome Wagon” and be given a shovel and hoe and be put to work. Nobody says the world is fair though.
Thanks to my running off course here I’ve managed to run out of time.
“Wolfshead” is a collection that delivers in every way. Grab a copy if you can find one. Even though I didn’t cover it “The House of Arabu” is the best story in the book. Set in the real world, “Arabu” deals with a northern Barbarian who is working in the Middle East as a mercenary back during the early dark ages (I think). He flees a curse and runs into Arabic Demon/gods. It’s hard to describe. Believe me though it’s a great story and the ending covers Howard’s recurring theme of Barbarism vs. civilization, which is a huge topic all by itself.
“The Argive wheeled away, toward the city, then hesitated, shaken by a fierce revulsion. The level land lay quiescent beneath the moon, and the brutish pyramid of Enlil stood up in in the stars. Behind him lay his enemy, glutting the fangs of the horrors he himself had called up from the Pits. The road was open to Nippur, for his return.
His return?-to a devil-ridden people crawling beneath the heels of priest and king; to a city rotten with intrigue and obscene mysteries; to an alien race that mistrusted him, and a mistress that hated him.
Wheeling his horse again, he rode westward toward the open lands, flinging his arms wide in a gesture of renunciation and the exultation of freedom. The weariness of life dropped from him like a cloak. His mane floated in the wind, arid over the plains of Shumir shouted a sound they had never heard before-the gusty, elemental, reasonless laughter of a free barbarian.”

And to close things off, here are a few of my favourite Paul Lehr covers!
Thanks for stopping by! 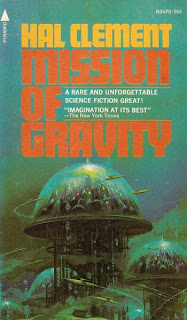 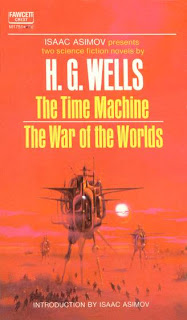 This edition of "War of the Worlds / The Time Machine is the very first book that I ever purchased with my own money! As a kid, I looked for ages for WotWs thanks to the "Classics Illustrated" version. I finally found it at the Drug Store's Paperback Rack at the "Plaza Shopping Center" back around 70 or 71. Like I've said earlier, I was a very strange child. 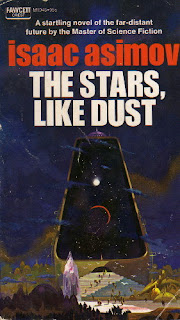 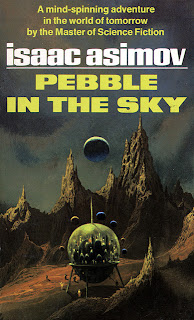 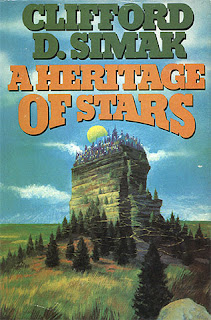 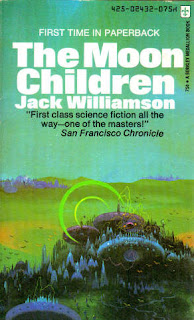 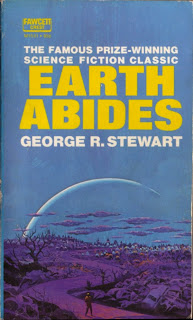