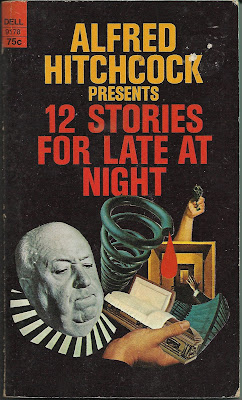 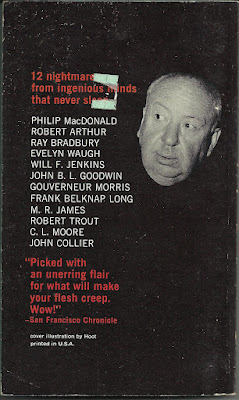 “12 Stories for Late at Night” is one of my favourite “Alfred Hitchcock” anthologies and is one that once again shows us what a fine anthologist “Robert Arthur” was. It’s a terrible shame that he was always stuck behind the “Alfred Hitchcock Presents” header and never truly received the fame or credit that he deserved.

This anthology contains 12 very strong stories which cover a broad spectrum of stories that can be classified as “horror”.  What I find so great about these “Hitchcock” anthologies is that they helped to bring a lot of great stories out of the genre ghetto by introducing some wonderful stories and writers to a reading audience that usually wouldn’t be seeking these kinds of stories out.  I’m not a 100% positive on how many there were exactly, but from the ones that I’ve seen and owned, it appears to me that the majority of these anthologies from Dell contained mostly suspenseful murder stories with the occasional “horror” story. “12 Stories for Late at Night” contains nothing but horror stories. I’m betting that tens of thousand of folks were introduced for the first time by this series to such genre greats as “Ray Bradbury”, “John Collier”, “M.R. James”, “Frank Belknap Long”, “C.L.Moore (with Henry Kuttner) and many others. All of the above mentioned authors appear in the volume alone! Like I said, this anthology offers a huge spectrum of stories across the entire spectrum of horror short stories! Heck, I even had an old Aunt who many years ago ravenously read the “Hitchcock” anthologies even though she wasn’t, as far as I knew, a “horror fan”. That proves to me both the quality of the stories chosen by Mr. Arthur for these anthologies that and Mr. Arthur’s extreme good tastes in short stories in general.
Thank you very much Mr. Arthur!

And now to the stories….

“Death Is a Dream” by Robert Arthur.

A young Lawyer, during the first week of marriage with his young bride, starts having problems with nightmares, a split personality and a deceased first wife who doesn’t seem to be so dead after all.
The ending is telegraphed, but still it’s still a fun piece of grisly and hysterical melodrama.

Before he became “RAY BRADBURY” Mr. Bradbury penned quite a few genuinely effective horror stories for “Weird Tales” and some of the other magazines.
This one which originally appeared in the women’s magazine “McCall’s” was one of those doozies.  It’s incredibly similar to a story by “Charles Beamont” called “The Hunger”. Both stories deals with attractive spinsters in their late 30s who flirt with death had the hands of serial strangler rapists. I guess it’s some sort of sexist “she was askin’ for it” sexual frustration thing.  Mr. Bradbury’s story shows us how dumb it is to challenge death in a town being terrorized by a serial rapist strangler. Our heroine just has to go and ignore all warnings by walking all the way home after midnight from the movies through a heavily wooded ravine by her self.

This is one scary story, which even though you know it won’t have a happy end, which keeps you on edge up to the very end. It just goes to show that some people need to get laid more often.

This is a great story with an awesome premise which must have been highly original back in the 1920s. A poet turns his back on society by deciding to hide out and start a new existence in a large department store. He even has to pose as a mannequin to avoid being caught by the night watchman. It turns out he’s not the only one who lives this way and discovers a hidden society of misfits living in the cities department stores and other institutions such as the city morgue. They have a strict moral code of conduct which is enforced by the morgue dwellers. Sadly our poet falls in love with an orphan who has been enslaved/indentured by some of the fallen aristocrats living in hiding and runs afoul of the ghoulish morgue enforcers who are both taxidermists and cannibals.
This is a great story told in a genteel style which still manages to be suspenseful and gory.

“The Cocoon” by John B. L. Goodwin

I’ve covered this one before in my post about “Things with Claws”. This one scared the spit out of me as a kid. A spoiled little rich boy loves to collect and torture butterflies and moths. He finds a very large and odd cocoon which he takes home and pins to the wall. The ending is so terrible that I’ve never forgotten it even after 40 years. That it’s a child who suffers such a nasty death makes the ending almost unbearable.

The wife and husband team of “C.L. Moore” and “Henry Kuttner” were a big deal back in the 1940s. They were responsible for many classic stories such as “Mimsy were the Borogoves” and “Vintage Season”. Both were very successful alone back in the 1930s with many stories that appeared in “Weird Tales”.  Their most special stories were collaborations under the names of “Lewis Padget” and “Lawrence O’Donnell”. Vintage Season is a melancholy and somewhat frightening Science Fiction novella about Catastrophe Tourists from the far future who rent a mansion in a small town during the month of May.  Their purpose and origins slowly unfold during the story as the owner of the rental slowly starts a romance with one of the female visitors. It turns out that something very bad is going to happen and these “tourists” want to witness it. This is an extremely sad story and one of Catherine Moore’s very best if not the best thing she ever wrote. Many scholars credit her with most of the writing in this story. It bet the readers who were expecting a murder mystery got their socks knocked off by this one.
BRAVO MR: ARTHUR!
“Vintage Season” was filmed in 1992 with Jeff Daniels as “Grand Tour-Disaster in Time”. Check it out if you can find it. But Hollywood being Hollywood the film has a happy ending.

„The Ash Tree“has the odd honour of being Mr. James’ most literal story. What was always so much fun with the ghost stories of Mr. James was trying to figure out at the end what exactly happened. That’s not the case here and it actually seems to help make the story more accessible for readers new to M.R. James.

It seems Sir Richard helps get an old woman, who has been accused of witchcraft, condemned and hanged. Her dying words are “The will be visitors at the Hall”.  This warning is of course ignored and with bad results. Afterwards Sir Richard decides upon moving his bedroom to another wing of the house. Directly outside his window is a huge and ancient Ash tree. It’s seems that folks thought that trees outside the bedroom made for unhealthy air. And what’s odd is that at night small cat sized animals can be seen scurrying among the branches. And even if the can’t be seen clearly they give the impression of having more than four legs!  Something also at this time keeps scratching at Sir Matthew’s window at night which disturbs his sleep greatly. This doesn’t worry Sir Richard though. This is a shame; because he wakes up dead the next morning after deciding to sleep with the window open. He’s discovered black, swollen and with two small bite like punctures on his torso. And from the position of the corpse it seems he died in great agony. So the room gets closed up for a hundred years or so, until his great grandson moves in and decides to take over his ancestor’s old bed. Did I mention that during the years after Sir Richard’s death all livestock that isn’t safely locked up at night mysteriously dies?

I guess that we can all see where this is going.

"Side Bet" by Will F. Jenkins (Murray Leinster).

This is a fairly short story about the battle of wits and will between a man and a rat that are shipwrecked on a rock in the middle of the pacific with hardly any food or water. This is a fun little story the ends better than expected.

This one by Mr. Long is a great “Wierd Tales” reprint that had only been reprinted once before in Mr. Long’s “Arkham House” collection “The Hounds of Tindalos”.

This story is pure pulp madness! Something slimy and most likely dead appears on a Caribbean bound cruise ship “the second night out” of ever cruise and makes off with parts of unlucky passengers.

This one is lots of gruesome insane fun!

"Our Feathered Friends" by Philip MacDonald

This pretty odd story that starts out light hearted ends up pretty grisly. A young couple on a summer’s Sunday drive decide to take a walk in the woods. The woods are full of singing birds that aren’t as sweet as they appear to be at first. I guess Mr. MacDonald’s heirs could sue the makers of “Angry Birds”.

"Back There in the Grass" · Gouverneur Morris

This is a good story with some stupidly racist overtones. But, hey what can you expect form a South Seas story written in 1911. We have a foot tale Polynesian snake woman who falls in love with an American telegraph operator on a treeless tropical island. This story has one of the most cold hearted and callous endings that I’ve ever seen in a story.

This is a very short but good story that is the weakest selection in the anthology. It was written in 1945 and take place in the 1960s. After 20 years of world peace we get a Radio reporters minute by minute account of what appears to be a massive nuclear sneak attack on America in transcript form. Mr. Trout was a genuine radio journalist during WWII.

“The Man Who Liked Dickens” by Evelyn Waugh

This is another of those stories that has such a disturbing end that it keeps you occupied for days on end. An upper class twit decides to finance and join a very poorly planned Amazon expedition with the sole purpose of punishing his unfaithful wife. I know, I can’t really follow his logic either. What starts out as a comedy turns into a horrible surrealistic tragedy. Our twit is the sole survivor of his expedition when he stumbles into a jungle clearing while in a state of delirium. He is rescued and cared for by a local man who is half English and half Indio. Because his benefactor is illiterate, our twit reads Charles Dickens daily to the man during his convalescence. After a while our twit realizes that his rescuer doesn’t seem to be in much of a hurry to let his “reader” go.  I guess that you can once more see where this is going.

I found this to be an extremely satisfying collection with a wide choice of stories covering different styles and genres. With “horror” being the combining thread running through all of the stories.

Get it if you can find it. It’s well worth it.

Thanks for stopping by!