Clark Ashton Smith, the weird of it all!


the weird of it all. 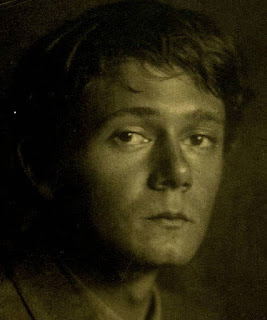 This week I want to discuss the works of Clark Ashton Smith. Mr Smith, as far as most contemporary readers are concerned, was the third member of “Weird Tales Magazine’s” Big Three. The other two are “Howard Phillips Lovecraft” and “Robert Ervin Howard”.  It’s unfortunate that Mr. Smith isn’t nearly as famous as his two friends. I think that his lack of wide spread fame is explained by several factors that he had no control over. I think that by not being as eccentric or as tragic a figure as Lovecraft and Howard has robbed his name of that certain romanticism that hovers over the reputations of HPL and REH. To put it bluntly, CAS just wasn’t the “character” that his two friends were. From all accounts even though Mr. Smith led a fairly reclusive life, it was a matter of choice and not because of any social inadequacies or awkwardness. There stories that he was quite the ladies man and lead a very energetic existence as far as relationships with the fairer sex goes.  In his introduction to “The Return of the Sorcerer: The Best of Clark Ashton smith” the great Gene Wolfe adds this statement….
“At the time he wrote for the pulps, Smith lived in a cabin near an abandoned mine, far from any neighbour. The nearest town was Auborn, northeast of San Fancisco; Auborn is not large even today. There can be little doubt that strange lights shone in the windows of the cabin by night, and that strange sounds emanated from it. No source I have found reports these; but when a man like Smith lives in a place like that, he has visitors.”

Another big drawback for Smith is that he never managed to create a franchise like Howard’s “Conan” or Lovecraft’s “Cthulhu Mythos”.

I won’t bother going over Mr. Smith’s biography since it’s all online and so many people have done it so much better than I ever can or will. I’ll only point out that he was a famed poet before he became a writer, sculptor and painter. Instead, I want to speak about his writing.

Trying to describe the stories and style of CAS is like trying to describe the music of “Phillip Glass”. You know that its Glass music the second you hear it, but can you describe it to someone who hasn’t?  That’s not very easy is it?
CAS had the most amazingly obtuse vocabulary that I’ve ever read. He supposedly memorized an entire dictionary as part of his “self education”. Just looking at his story titles makes you want to grab a dictionary. At least I need to at times. Here are some examples…

“The Dark Eidolon”
“The Seven Geases”
“Genius Loci”
and
“Chinoiserie”

Those are titles that make you have to scratch your head and wonder what they could be about. And it’s such audacious wordage such as this is one of the things that make Mr. Smith so wonderful to me.
His stories are not easy to describe. CAS heavily corresponded with HPL and REH, so there is some cross pollination of ideas among the 3. Each though was his own animal with his own distinct voice and vision. If I wanted to be lazy I would say that if you mixed HPL and REH in a blender, added a bit of erotic kinkiness and a strong does of sly humour than you might just come close to describing the style of Clark Ashton Smith.
He wrote predominately fantasies in a more or less “Sword & Sorcery” vein.  He wrote quite a bit of straight horror also a lot of early SF for the Gernsback Magazines.
The common thread in all of his stories was the pure weirdness of it all.  I would but it simply that Mr. Smith wrote “weird tales”. And I mean that this “weirdness” in smiths stories was much purer in his stories that in the stories of HPL and REH. Howard wrote what could be mostly described as Heroic fantasy/Swords and Sorcery and HPL mostly wrote SF disguised as horror. Regardless of what Mr. Smith was writing at the time, be it SF, Horror of quasi Sword & Sorcery, it could all be described as “weirdness” that was at a level that HPL and REH never achieved.

Mr. Smith created several story cycles/worlds that never managed to catch on like Howard’s  “Hyperborea” or Lovecraft’s “New England” did. These worlds were

“Poseidonis”, which was a remnant of sunken Atlantis.
“Xiccarph” a fantasy world circling a distant star.
“Hyperborea”, an ancient fantasy version of Greenland which is not to be confused with REH’s antediluvian fantasy home of “Conan”

And lastly my favourite,
“Zothique”!

Zothique is a far future Earth where the sun is a dying “Red Star”, the continents have sunken and only “Zothique” remains as the last continent. In this far future our present history has been forgotten, new gods have been created, old gods have been reborn and the world has become a decadent place of danger and magic.

There is only one writer today who I think of who has an understanding of the “weird tale” that is on the level of Clark Ashton Smith. And that writer is “Darrell Schweitzer”.
Mr. Schweitzer has his own voice and vision that still manage to evoke a weirdness that parallels the stories of Mr. Smith. Please grab a copy of one Mr. Schweitzer’s fantasy novels of collections and you will see what I mean. They are true treasures and a joy to read.

Clark Ashton Smith is one of the few writers who enchant me as much today as they did almost 40 years ago when I discovered him through Ballantine’s “Adult Fantasy “series edited by the late great Mr. Lin Carter.

Here are two CAS passages that have burned themselves into my mind over the past decades. The first is the opening paragraph to his prose poem “The Abominations of Yondo” and the second is the closing paragraph to his SF story “The Monster of Prophecy”.

“The sand of the desert of Yondo is not as the sand of other deserts; for Yondo lies nearest of all to the world's rim; and strange winds, blowing from a pit no astronomer may hope to fathom, have sown its ruinous fields with the gray dust of corroding planets, the black ashes of extinguished suns. The dark, orblike mountains which rise from its wrinkled and pitted plain are not all its own, for some are fallen asteroids half-buried in that abysmal sand. Things have crept in from nether space, whose incursion is forbid by the gods of all proper and well-ordered lands; but there are no such gods in Yondo, where live the hoary genii of stars abolished and decrepit demons left homeless by the destruction of antiquated hells.”

“When the poet had communicated this bit of astronomical information to Ambiala, that the star Atana was his own native sun, and had also told her of his Ode to Antares, a most affecting scene occurred, for the empress encircled him with her five arms and cried out:


'Do you not feel, as I do, that we were destined for each other?'


Though he was a little discomposed by Ambiala's display of affection, Alvor could do no less than assent. The two beings, so dissimilar in external ways, were absolutely overcome by the rapport revealed in this comparing of poetic notes; and a real understanding, rare even with persons of the same evolutionary type, was established between them henceforward. Also, Alvor soon developed a new appreciation of the outward charms of Ambiala, which, to tell the truth, had not altogether inveigled him theretofore. He reflected that after all her five arms and three legs and three eyes were merely a superabundance of anatomical features upon which human love was wont to set a by no means lowly value. As for her opalescent coloring, it was, he thought, much more lovely than the agglomeration of outlandish hues with which the human female figure had been adorned in many modernistic paintings.


When it became known in Lompior that Alvor was the lover of Ambiala, no surprise or censure was expressed by any one. Doubtless the people, especially the male Alphads who had vainly wooed the empress, thought that her tastes were queer, not to say eccentric. But anyway, no comment was made: it was her own amour after all, and no one else could carry it on for her. It would seem, from this, that the people of Omanorion had mastered the ultra-civilized art of minding their own business.”

If you like this kind of writing then you can read much more at the CAS fan page “TheEldritch Dark”. They have the complete e-texts to his stories.

“TheReturn of the Sorcerer; The Best of Clark Ashton Smith” is still available/inprint.

“Penguin books” is planning a CAS collection of stories and poetry for 2013!!!


Ray Bradbury once said this about Mr. Clark Ashton Smith”


“Smith always seemed, to me anyway, a special writer for special tastes; his fame was lonely. Whether or nor it will ever be more than lonely, I cannot say. Every writer is special in some way, and those who are more than ordinarily special are either damned or lost along the way.” Knowing that they won’t damn Clark Ashton Smith, and that they are willing to recover what of his might be lost, gives his fans a sense of closeness to him."

I wish that this wasn’t such a rambling and disjointed post this time, but Mr. Smith’s stories are so unique, wonderful and special that I’m at a loss of words to even begin to describe them in the way they truly deserve. I just hope that that I have piqued your interest enough to take a look at the world of Clark Ashton Smith!

I was so deeply impressed by Mr. Smith's stories that I built a time machine during a my lunch breaks at work so I could visit "Zothique" myself!

Don't try this at home kids! 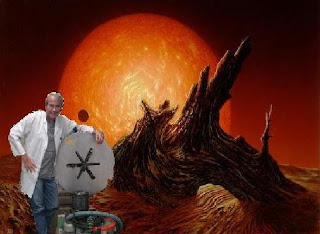 Now check out some of these wonderful CAS covers from my collection. 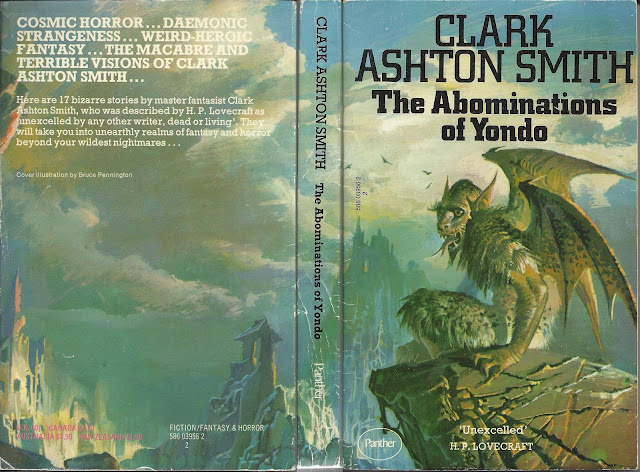 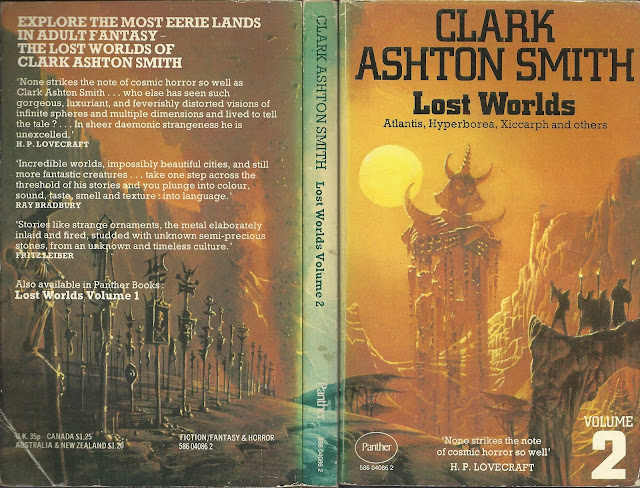 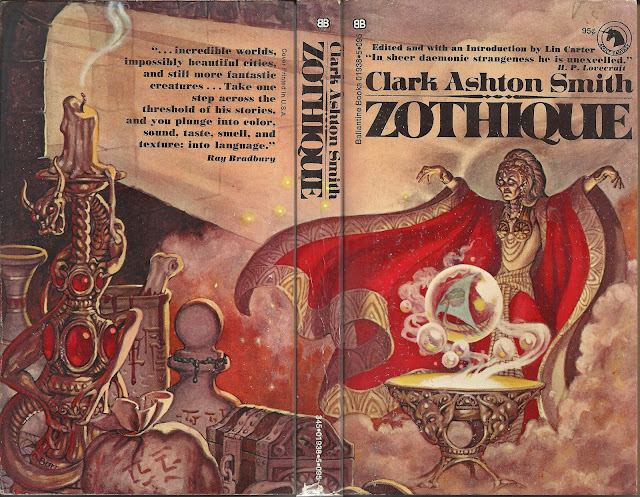 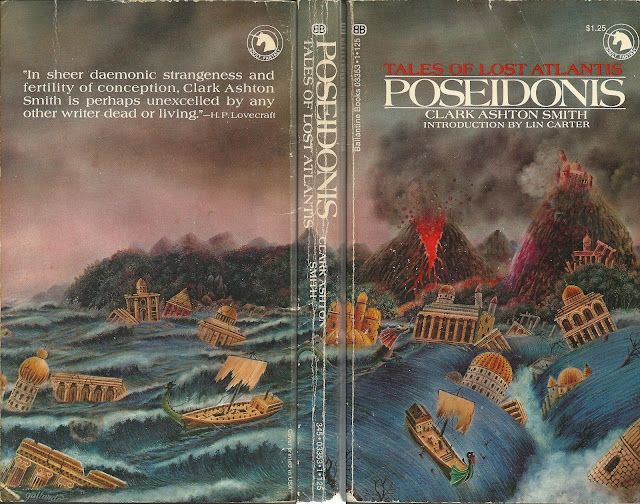 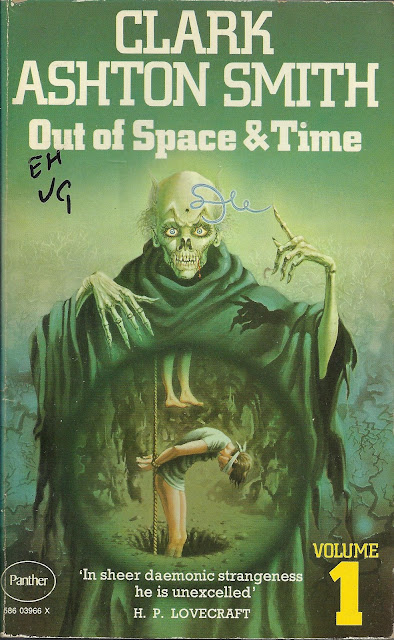 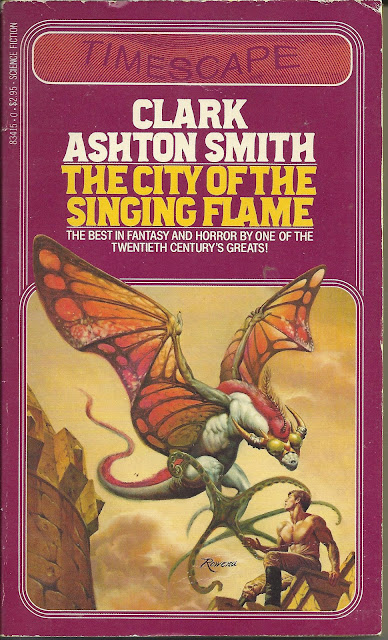 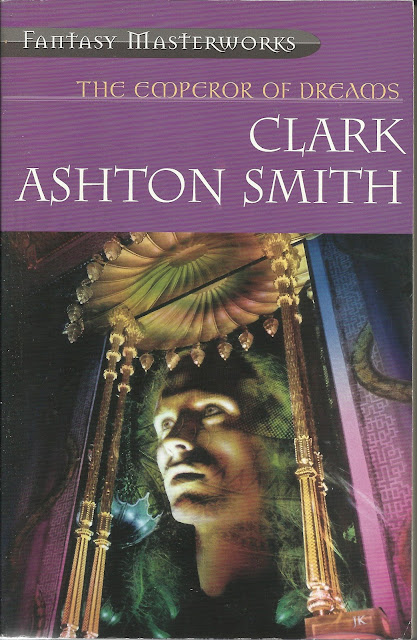 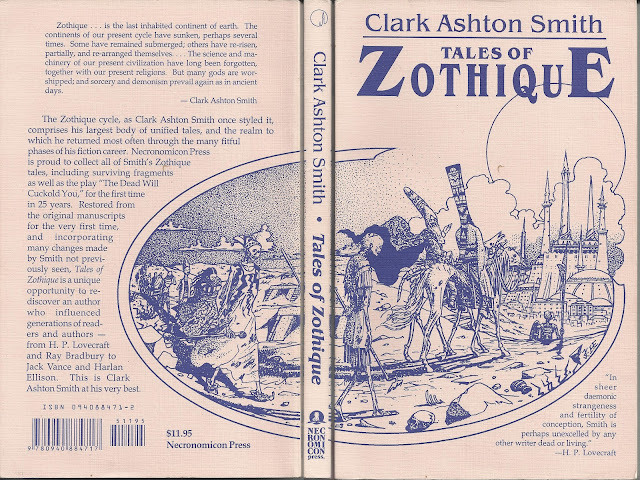 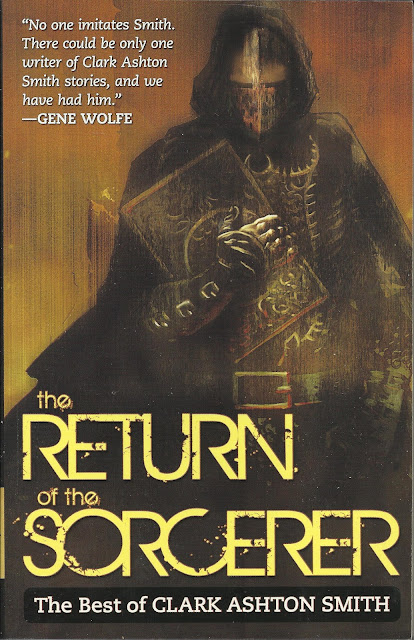 Take care and thanks for stopping by!!