The Moon of Skulls by Robert E. howard


The Moon of Skulls

My  copy of the Centaur Press  edition. 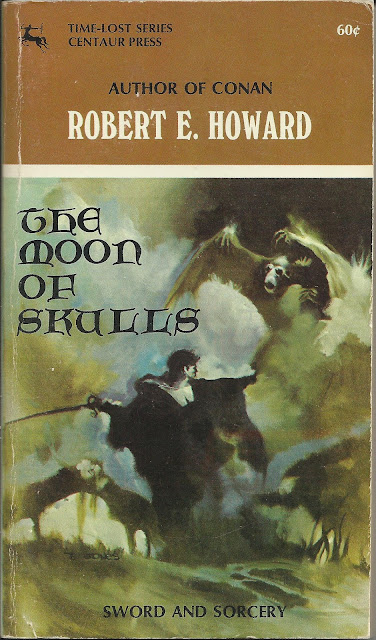 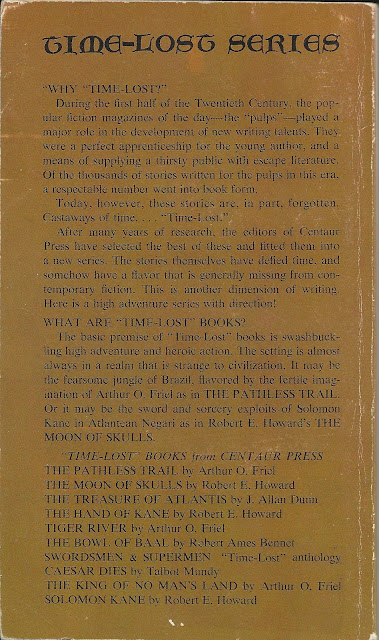 
“The Footfalls Within”: Weird Tales, September 1931

I had planned on covering another anthology, but since Mr. Howard’s 107th birthday was this past week the other anthology will have to wait until next Sunday.

Does REH even belong in a blog covering old Horror Paperbacks since he is most famously known for his "Sword&Sorcery” tales? I think yes, since one of the big differences between S&S and “Heroic Fantasy” is a very strong element of supernatural horror running through most S&S tales. And I think that Mr. Howard’s “Solomon Kane” adventures are a perfect example action filled horror stories or if you wish, horror filled action stories. In these stories the genre lines are very blurry.

The character of “Solomon Kane” appeared in 9 stories, 5 fragments and 2 poems all written between 1928 and 1932. The first seven stories were originally published in “Weird Tales Magazine”. The rest were first published during the 1960s.

Solomon Kane is Bob Howard’s 2nd most popular character after “Conan” and some folks would argues that “King Kull of Atlantis” shares 2nd place.  I personally enjoy the Kanes stories much more than the Kull stories.

Solomon Kane was Howard’s 17th Century Sword swinging, pistol firing “Puritan” avenging angel. He was a very busy guy travelling around England, Europe and Africa. Kane was literally a one man arming who spent his life writing wrongs and battling evil, be it human, supernatural or both. Kane has gone up against Pirates, Ghosts, Slavers, Zombies, Demons, Lost civilizations and even Harpies!

I’m a huge fan of almost everything Mr. Howard wrote. He poured his heart and soul into to every story. Even though he was a working writer pounding out stories every single month from the time he was 18 up until his death at the age of 30, he put so much energy and conviction into every story that you get carried away immediately into every single word. Only god knows what heights he could of reached if he would have had the luxury to take his time with writing and not had to have worried about making a living purely as a Pulp writer. As far as I’m concerned much of his writing transcends pure “Pulpfiction”.  That’s why we are still reading his stories more than 77 years after his death.

Not being a “Howard Scholar” it appears, to me at least, that the qualities that made him “great” were also the things that drove him to take his life at the young age of thirty years. Mr. Howard’s passions were enormous. This meant that his hatreds were as large as his loves. This tends to weigh heavily on many of his tales, filling them with contradictions. He championed the under dog, hated fascism, slavery and injustice. At the same time he could be bigoted or  racist. He would abhor slavery and at the same time champion the superiority of the white race and Anglo culture. To me, this showed the war being raged in his soul. He spent almost the entirety of his life in the small isolated town of “Cross Plains” Texas. He grew up during hard times in a rough world. Our concepts of racial harmony and progressive thinking hardly existed back then, or at least not in popular culture. I think that because of his great passions, inexperience in the wider world and genius, these non-PC traits tend to slap you in the face at times. Depending on how you look at it, it can either harm the story or increase its (misguided) honesty, power and authenticity.

I won’t lie; I can forgive him almost everything. That’s how wonderful these stories are. Had he been a calmer, more open and level headed human being he probably would have been a much lesser writer. It’s seems that there is a very fine line between great artistic genius and self destructive madness.  Mr. Howard walked this very fine line only to finely slip over at the age of thirty.

I like to think that if he had lived longer and moved out into the wider world he might have become a more tolerant and open minded man. That is something that we will never know though.

So that’s the contradiction that was/is Robert Ervin Howard. The things that contributed to his greatness were also a madness that brought about the end of his life far too early.
Now let’s get to those stories.

“The Moon of Skulls”

Kane is travelling across Africa searching for a young English woman who has been kidnapped by pirates and possibly sold into slavery. While following her trail deep into the heart of unexplored Africa he finally finds her being held prisoner in the lost city of Negari which is the last outpost of sunken Atlantis. The city is ruled “Nakari, the Vampire queen of Negari”.  Nakari being “white” wants Solomon as her mate. He refuses and hilarity ensues. This is an entertaining mixture of  Edgar Rice Burroughs’ “Opar” and Haggard's “She”. Sadly, the racism tends to be fairly overt and probably would insult many modern readers. I doubt that I could recommend it to a black friend.  So as I mentioned above, this is a real love hate kind of story. There are some serious “he’s gotta be fucking kidding!” moments in this story as far as the racism is concerned, that almost destroys the story. If you have a fairly healthy “bull-shit meter” then just ignore the racist comments and go along for the insanely enjoyable ride.

“Skulls in the Stars”

Back in England Solomon travelling across the moors, takes the path less taken and runs afoul of a ghost. Guess who wins?

This is another tale chronicling Solomon’s travels across Africa and is one of those classic Bob Howard contradictions. This time he’s rescuing and avenging a tribe of Africans who have been captured by Arab slave traders and taken to the coast on a forced death march through the jungle. Kane ends up being captured by said slavers and joins the march as a prisoner. Luckily for Solomon and the natives the caravan runs across a temple/tomb from some ancient lost civilization. Lucky that is, because the Slavers just have to open it up to see if it contains treasure. Instead of discovering treasure then awaken and release the demon that has been imprisoned within. This is a fun short little story with sympathy for the African victims instead of disdain and of course, Solomon once more dishing out some seriously righteous ass kicking!

What I found so great about this slim volume containing a novelette and two short stories is that we get to see both sides of Mr. Howard’s world view. And huge warts and all, Robert E Howard will always have a place in my heart, library and who is someone whose stories I will always happily return to in the years to come!

Here are scans of the rest of my Howards! I don't have as many as I used to. I hope that these are still of interest though! 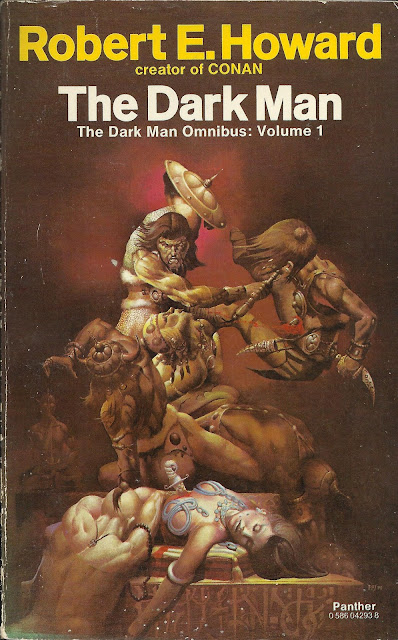 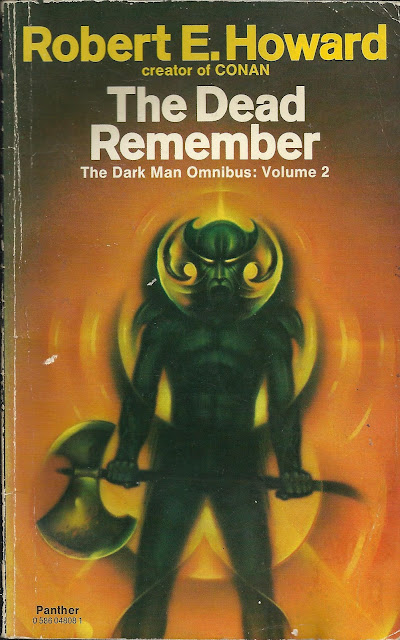 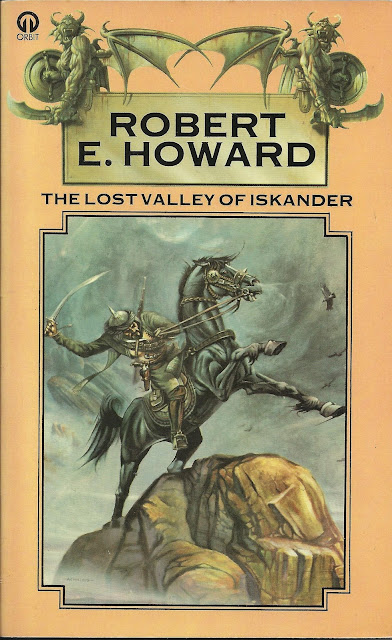 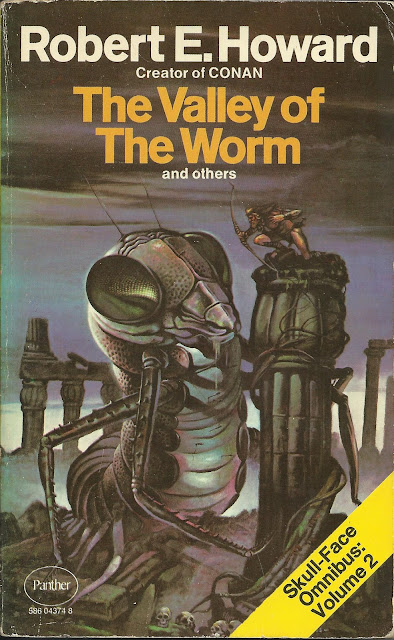 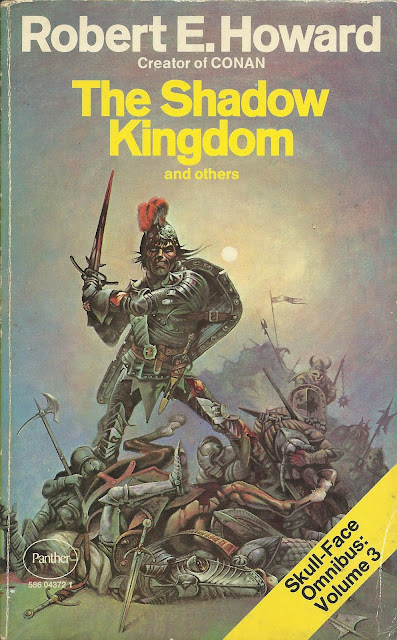 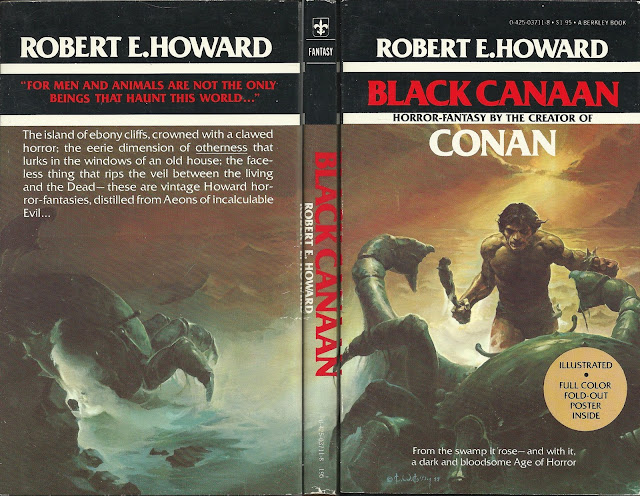 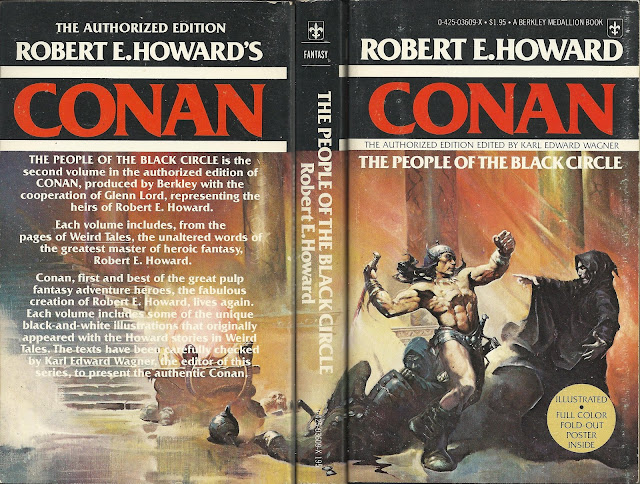 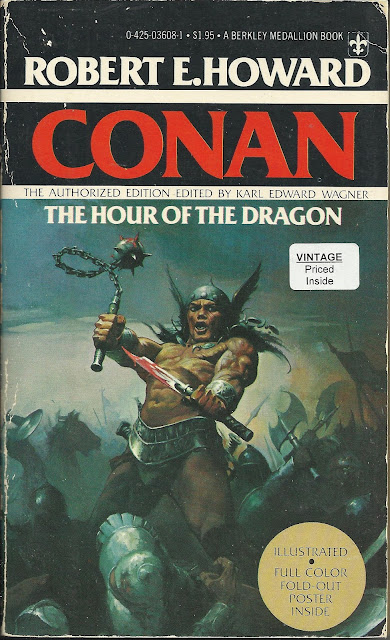 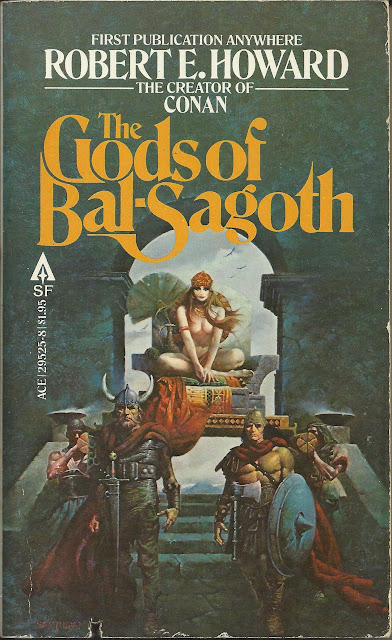 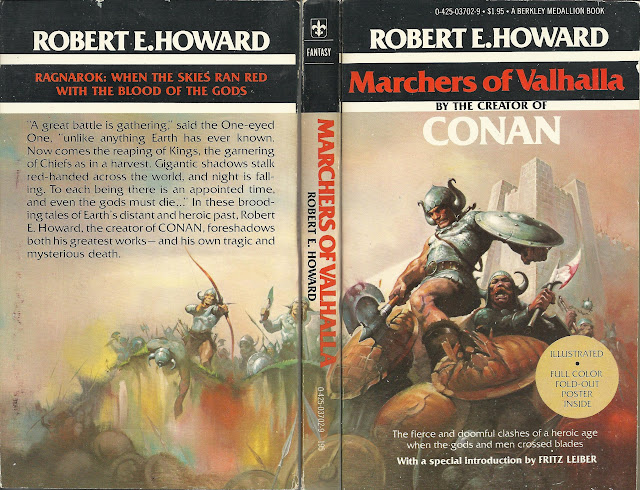 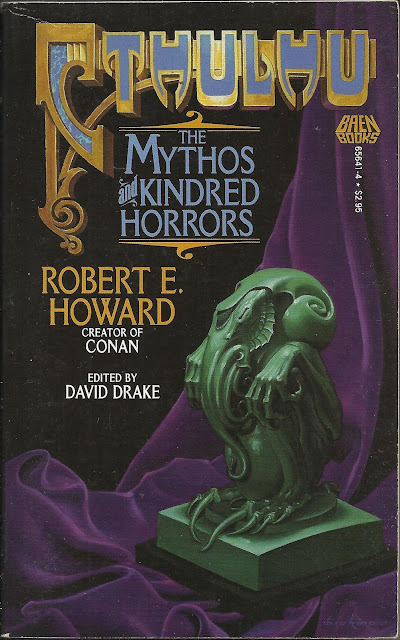 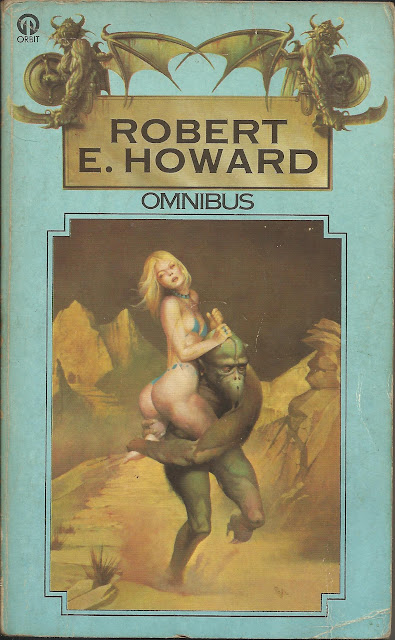 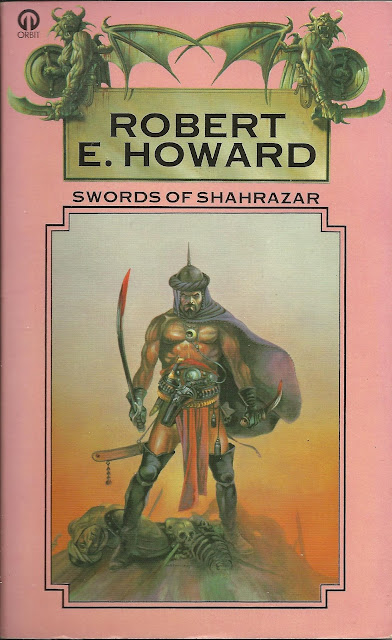 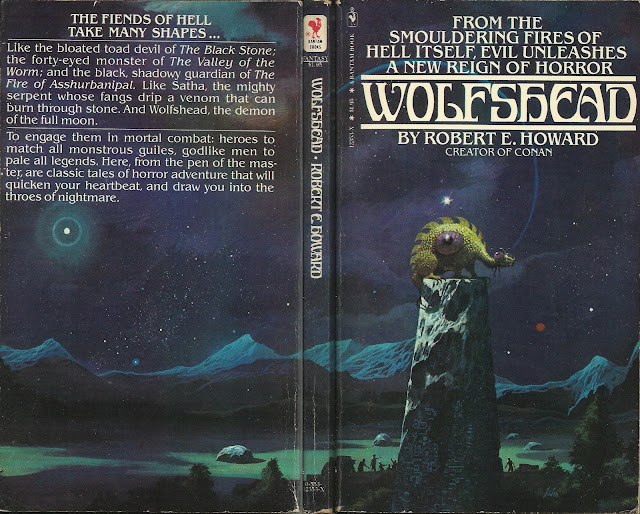 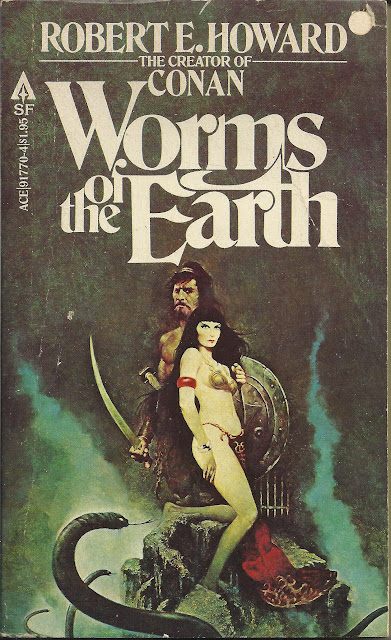 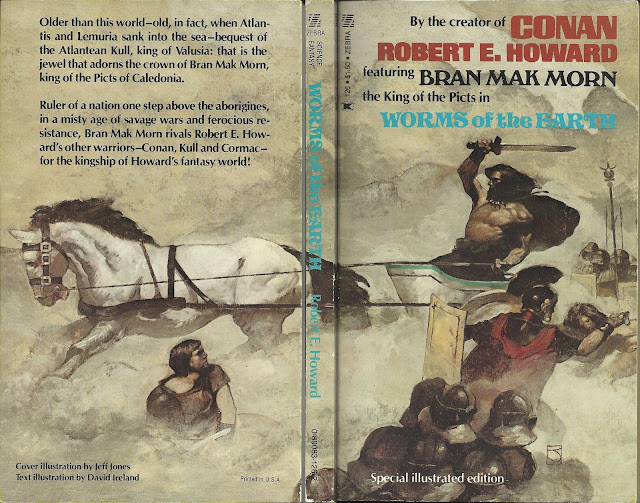 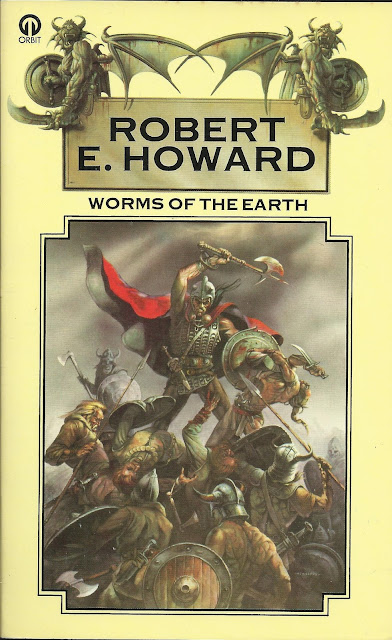 There are still two “Solomon Kane” collections in print.

The inexpensive “The Right Hand of Doom” from Wordsworth Books.
Here.

And lastly I’d like to bring a new book from “Michael Brooks”, a successful new writer to your attention.
Go here!

That’s it for this week!

Take care and thanks for stopping by!!