Doc Savage: Madness from the Sea


Doc Savage: Madness from the Sea 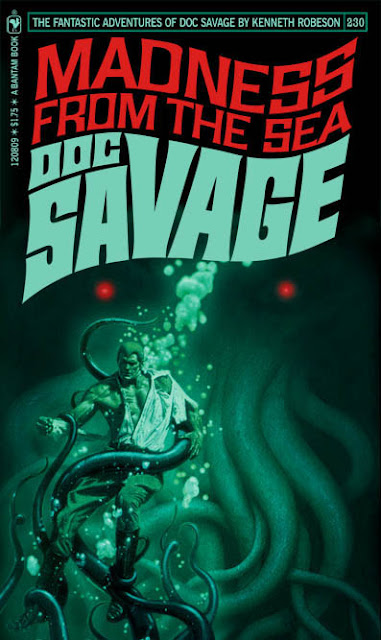 I’ve always had a weakness for the “Doc Savage” adventures. My love for which almost rivals my love of H.P. Lovecraft tales. So when I first bought this back 1974 I was almost beside myself with joy. After reading the back cover and paying for the book  I rode home on my bike so quickly that I almost got myself killed!

Here’s the back cover blurb……

“William Harper “Johnny” Little John, famed archaeologist and member of Doc Savage’s iron crew, is missing. The fractured remains of a grotesque figurine and a glowing message hastily scrawled on a broken mirror are the only clues to Johnny’s abductors. The words revealed on the shattered glass by Doc’s blacklight lantern would change the Man of Bronze forever: “In his house at R’Lyeh dead Cthulhu waits dreaming”

Now you can see why I almost got myself killed by being in such a hurry to get home and start reading!

Before we discuss the story, let me fill you in on how this most unusual of “Doc Savage” adventures came into existence.

As most of you know, H. P. Lovecraft corresponded at a level than can only be described as prodigious and that the writers he exchanged the most letters with went on to be know as the “Lovecraft Circle”. The most frequently mentioned members of this group were Frank Belknap Long, Robert E. Howard, E. Hoffman Price, Robert Bloch and of course August Derleth. The great Fritz Leiber was also a later member of this goup. What most causal fans don’t know is that “Lester Dent” was also a member of the group. Now these days Lester Dent is remembered by his Pen name of “Kenneth Robinson”. This is the house name put on every single Doc Savage adventure. Robinson created the character and went on to pen more than 80 of the Doc Savage novels under the name of “Kenneth “Robinson”.

Anyone interested in reading the scores of letters the two men exchanged need to either get their hands of a copy of “The Selected Letters of H.P.Lovecraft Volume V” published by “Arkham House” in 1976 or to buy a copy of “S.T. Joshi’s” “Converstions between a dreamer from Providence and a Schlock Meister from Manhatten”, published by “Hypothalamus Press” in 1998. The Joshi book is still in print and available from Amazon.

The letters exchanged between these two masters of their prospective fields shows us a great deal of insight between their conflicting world views. HPL believed that a true “gentleman” never wrote purely for financial gain where as Dent believed that a “true” writer could produce such high levels of quantity and quality that great financial success was to be taken for granted and his natural due. Another topic of their correspondence was to whether or not Mr. Lovecraft’s mythology could be effectively transplanted into the action adventure genre.  Dent stated in several letters that he would love to try his hand at placing Lovecraft’s theology” into the world of Doc Savage. Lovecraft gave his implicit permission by cryptically stating..

“My Lord Yog-Sothoth’s House has many rooms”

What is also so interesting about this quote is that “Brian Lumley” has repeatedly pointed out this converstion between HPL and Dent as justification and or defense of his own (accused) divergence from “Lovecraftian ideological purity/dogma”. So as we see here, Mr. Lumley was not the first to place HPL’s “Yog-Sothothery” in an action and adventure setting.

Mr. Dent, after interpreting HPL’s statement as implicit allowance to use the “Mythos” set about writing one of the most wonderfully over the top and insane Doc Savage adventures that ever saw print. It didn’t end with this single Doc Savage adventure though. Lent went and dedicated the adventure to “My Providence Grandfather”.  Mr. Lovecraft, who always appreciated a good inside joke, went and instigated the story that the narrator of his 1931 serialized novel “At the Mountains of Madness” was none other than Doc Savage’s aid “William Harper “Johnny” Little John”! Now, it becomes even weirder. Both Doc Savage Magazine and Astounding Science Fiction, were ATMoM originally appeared, were published by “Street and Smith”.  “John W. Campbell” the editor of “Astounding” and famous SF author decided to get into the act by writing Doc Savage into his famous short novel “Who goes There” the following year. “Who goes there?” is the basis for the two famous films “The Thing from Another world” and “The Thing”.  Here is Campbell’s description of “MacReady” who is actually an incognito Doc Savage investigating the strange goings-on in Antarctica!

If that isn’t a perfect description of Doc, then I don’t know what is!

Now let’s discuss the story since I think that I’ve bored you with enough background.

“Madness from the Sea” is more or less a direct sequel to HPL’s “Weird Shadows over Innsmouth”. “Madness” covers the events after WSoI’s narrator escapes Innsmouth and ends with the raid conducted on the town by Federal Agents and the Military.

The adventure starts after HPL’s nameless narrator escapes from Innsmouth and vainly attempts to warn the government of the threat posed to humanity by the hybrid inhabitants of Innsmouth, the “Deep ones” and the ancient gods that they serve. In a last ditch effort, because no one will listen to him, the young man tries to contact Doc Savage. He finally receives an appointment from Johhny Little John, who is the world’s greatest living archaeologist, and tells him his story. As proof, the young man show’s Johnny a few gold coins of ancient and unknown origin. Johnny recognizes the coins from previous expeditions he conducted in the South Pacific under the auspices of “Miskatonic University” during the 1920s before he became one of Doc’s trusted assistants. Since Doc and the other 4 assistants are off on another adventure Johnny decides to set off for Innsmouth with just Doc’s cousin “Patrica Savage” as company. In typical Doc Savage fashion the pair fails to return from their excursion. Doc and the remaining four aides infiltrate Innsmouth under various disguises to get to the bottom of the mystery. Doc and his crew are convinced that a smuggling ring is behind the entire situation and the Hybrids, Deep Ones and Elder Gods are just a cover story used to scare off outsiders. This is the single DS adventure that I’ve ever read that had a threat that wasn’t of mundane origin. After a series of chases, fights and escapes Doc, his five aids, Habeas Corpus the ape, Chemistry the hog and Pat Savage find themselves on the roof of the old “Marshe Gold Refinery” battling for their very lives against a small army of Deep Ones and hybrid humans. Another first for this series is that this is the only Doc Savage adventure where our heroes are forced to kill and do not even try to take prisoners or spare lives. It’s literally a free for all slaughter with dead fish men piling up  hundreds more arriving to fill the gaps of the fallen, the refinery on fire and our heroes at bay running low on ammunition for their “super firers”. The situation looks hopeless when suddenly; Doc’s private airship appears out of the night sky raining death and destruction down upon the army of batrachian horrors.


(I first read this when I was 13 and I thought that my head was going to explode from all of the excitement!)


Its turns out that Doc had sent out an emergency SOS shortly before his equipment was destroyed. This tells you how dire the straits are when Doc Savage has to call for assistance.  What happens next in the story is another stroke of cross-over genius. It seems that Doc’s call for help was picked up by playboy millionaire “Richard Wentworth” who is secretly the vigilante crime fighter “The Spider”. After receiving Doc’s distress call, Wentworth, with the help of Ram Singh, his Sikh man servant and fiancé, Nita Van Sloan, breaks into Doc’s secret hangar on the Hudson river and hot wires Doc’s private airship,. Wentworth then stops on the way to Innsmouth to pick up his own private arsenal and then continues on his way to assist Doc and his crew. After having gleefully slaughtered half the population of Innsmouth with military grade weapons, Wentworth lands and picks up our battered and bloody heroes. It’s strange to see some one in a Doc Savage adventure take life and not be chastised over it by Doc.


Now that he realizes the threat imposed to humanity by the events playing out in Innsmouth, Doc immediately begins to organize a counter attack against Innsmouth the moment they safely return to New York.


For you see, Doc has learned that “the stars are right” and they only have a few days before the inhabitants of Innsmouth and their Deep One allies release Cthulhu from his grave!

After informing the government about the situation in Innsmouth, Doc tells his aids to meet him at the secret hanger in 18 hours.  Upon arriving at the hangar the next morning they find doc waiting for them. It seems that he had flown his proto-type jet to his secret “Fortress of Solitude” that is located above the Artic circle. This is where Doc stores his inventions that he feels could pose a threat to the world if they fell into the wrong hands. They then transfer supplies, weapons and a mysterious crate that Doc brought back from the “FoS” into Doc’s private submarine, the Hell Diver. They then sail north for Innsmouth.


It turns out that Doc has learned of the existence of “Y'ha-nthlei”, the city of the Deep Ones lying in an oceanic trench off the coast before Innsmouth.  Doc has decided that this city must be destroyed at any cost if humanity is to be saved. To make a long story short, after fighting off an undersea army of Deeps Ones and other horror they launch a nuclear tipped torpedo down into the deep sea trench that hides Y'ha-nthlei at its bottom. The tale ends with Y'ha-nthlei being destroyed in an atomic blast, Innsmouth raided by the feds and humanity being, for the time being, saved.


The adventure ends with Doc making an all bands radio broadcast, from the Hell Diver, to the world…..

This has to be the best Doc Savage adventure that I’ve never read. It’s hard as hell to find, so good luck looking for it,

You can find the online text here though!
And HERE!!!

Take care and thanks for stopping by!