Nine Horrors and a Dream by Joseph Payne Brennan


Nine Horrors and a Dream 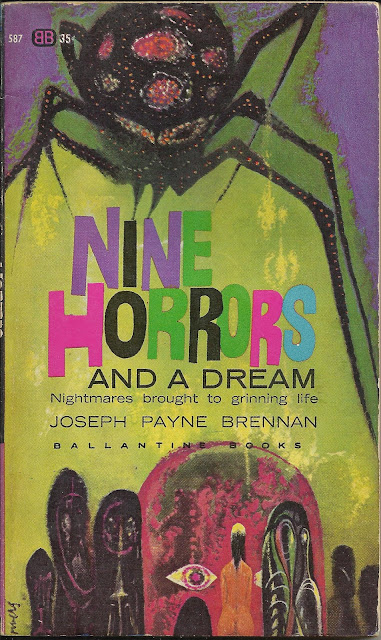 And I own four of the book advertised on the back cover! 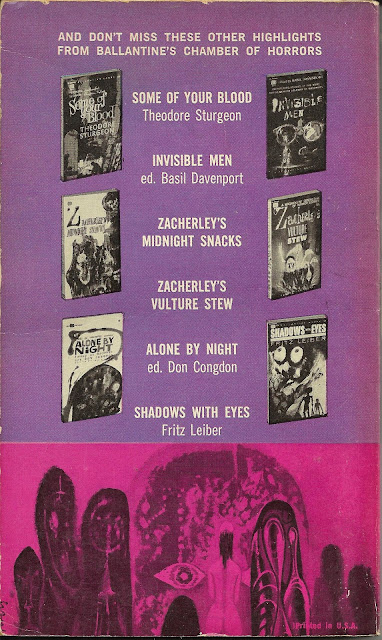 This week’s book “Nine Horrors and a Dream” has been one of my most sought after books these last several years. I already have Mr. Brennan’s other paperback collection “The Shapes of midnight” and previously owned 3 hard back collections which I parted with during the great book purge of 2009. I finally found a “good” copy at abebooks.com for a very reasonable price. And I finally got to read it this past weekend thanks to some seriously lousy weather.


This edition is a reprint of the “Arkham House” hardback from 1958. The AH edition costs an arm and a leg and is extremely hard to find. To be honest though, all of Mr. Brennan’s short story collections are hard to find and at a high price. I think this shows how popular he is with collectors and fans (I don’t want to use the word connoisseur.) You can find 3 of his hardback collections at just a bit more than the two paperbacks are going for.  I also bet that the wonderful “Richard Powers” cover art has help to maintain the high interest in this specific collection. So I was very happy to get this book at a fair price. I love sellers who don’t bother to accurately describe their books. If the seller had done that then they could have gotten 3 or 4 times more than the amount that I paid.


Two of the stories in this collection are among the first horror tales that I can remember reading back when I was young. This must have been back around 1971 or so. I first read “Slime” and “Levitation” in “Alfred Hitchcock’s Monster Museum” and in “Hauntings: Tales of the Supernatural” respectively. I was so impressed with both stories back then that I have never forgotten either one.


What I enjoy so much about these stories is Mr. Brennan’s economy of word, sense of place and strong mood. Most of his stories a fairly short, but he stills manages to make them into fully fleshed out reading experiences. “Nine Horrors and a Dream” is a prime example of this. I read the entire collection last Sunday in one setting and yet I’m still mulling over each and every story. This shows how good these stories are considering that only 3 of the 9 tales can be considered some of Mr. Brennan’s best work, yet even the lesser stories are still circling around in my head days afterward. That calibre of writing is something you stumble across every day.


You can go here and here if you are interested in Mr. Brennan’s life and works!


Now let’s take a look at those stories.


“Slime” is one of the grand daddies of the “Shapeless horror” genre.


A storm washes up the titular creature from the oceanic depths and it goes about sating its appetite until it has a little run in with the National Guard and a flame thrower. This remains one of my all time favourite stories. It’s gruesome goodness through and through. This is also Mr. Brennan’s trademark story which has been anthologized 50 times!


This is another good that’s seen quite a few reprints.  Its carnival time in a small rural town and  young farm hand accepts a dare from the carnival’s resident Hypnotist are he get called out for heckling. The Hypnotist puts the young man in a trance and convinces him that he can levitate. Things start out well, but it seems that the Hypnotist hasn’t been following his doctor’s advice and cut back on his cholesterol intake. As a 10 year old I thought that this had to be one of the most horrible fates that I could imagine. This is another powerful, but economical short story.


A young man buys a large and beautiful chest at an antique store at a ridiculously low price. The young fellow figures that there has to be catch since the price is too good to be true. He’s also bothered by the fact the antique dealer seemed to be desperate to be rid of the chest. Well, it turns out that there is a catch. A man was murdered and his body was stored in the chest that the young fellow purchased. It turns out that the dead guy’s spirit is still occupying the chest an he seems to be wanting a little company. This is a truly scary story with such an awful end, that even though it’s just a story, I was hoping to god that the guy was actually dead at the end of the story. Since if he wasn’t he suffered one of the most nightmarish fates that I myself can imagine. I wouldn’t even wish this on my worst enemy.


“Death in Peru” is a fun and nasty little story that exceeds even “EC” comics at their grisliest. A white man has his way with a barely of consenting aged Peruvian girl. He suitor takes issue with this and has a curse placed on the explorer. The explorer’s partner tries to lift the curse and bungles in one of the most horrible ways possibly. You would think that the man would take more precautions when digging up the “voodoo” effigy of some one near and dear him.


“On the Elevator" is some seriously black comedy. A huge storm off shore from a resort town ends up washing up some thing from the ocean floor (sound familiar?) that he been better left un-washed up. It makes it’s way to an ocean front hotel where the night clerk spends the better part of the evening running up and down the stairs from floor to floor after the thing as it uses the elevator to visit a few guests. I love this story. It’s extremely creepy and funny at the same time. It raises more questions than it answers. I figure that that must have been Mr. Brennan’s intent. This is a great story that’s both frightening and playful. This is a very rare combination in the horror genre.


This is the weakest story in the book and it’s still a fine, entertaining and minimalist horror story. A motorist travelling through some woods see a green parrot fly across the road.  He stops to investigate and is approached by a little old lady who emerges from the wood in pursuit of the bird. It seems that the bird is her sole companion and taking pity on her the narrator agrees to help her in the search. This turns out to be not one of the best ideas since he later learns that she’s been losing that parrot over and over again since the two of them perished in the big snow storm of 1860!


“Canavan’s” has to be Brennan’s second most famous story. The premise is simple and simultaneously brilliant. Mr. Canavan, a New England book dealer”, has a house with a very interesting back yard. It seems to be infinite. He keeps being drawn to it and develops an obsession against his will to wander off into it and lose himself. It seems that his property is part of an old marsh were a convicted witch was hunted down by starved hounds a few centuries before. With her dying breath she curses the property and those who live upon it. I bet that you can figure out where this one might be going. Another superb tale in an overall great collection!


This has to be the strangest story in the book. A writer is asked by a chance acquaintance to write a story about him. The acquaintance, Mr. Massington, fears that once he dies there will be nothing to show that he ever existed. He’s convinced that if he is a character in a story then he won’t be completely forgotten. What he plans on doing after the publication of the story and the role that the reader of said story plays in Mr. Massington’s ultimate fate gives the story it’s fairly surprising twist ending.


“The Hunt” is another story that even though it’s fairly playful still manages to be frightening and creepy. A man gets pursued across Connecticut by a stranger who saw him waiting for a train. I don’t want to give it away, so all that I can say is “The thrill of the hunt and the anticipation of the kill are more important that the results of the hunt.


“The Mail for Juniper Hill”


True to the old adage that “Neither wind, nor rain, nor snow, nor sleet, nor dark of night can stop the U.S. Mail.” A drunk and stubborn mailman doesn’t even let death from keep him from his duties.

Looking back, I can only come to the conclusion that Mr. Brennan has been so unfairly neglected. As amazingly good that this collection is, the majority of his other stories are even better.


So if you can find them do your self the great favour of (re)discovering this neglected master of the macabre!


Take care and thanks for stopping by.