Alfred Hitchcock Presents: Stories not for the Nervous 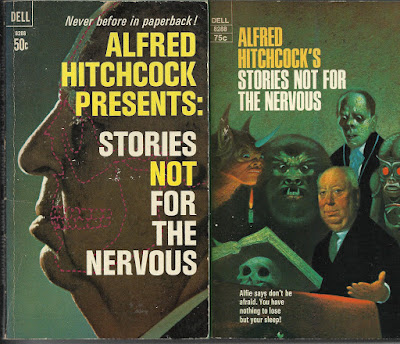 Scans of my two copies 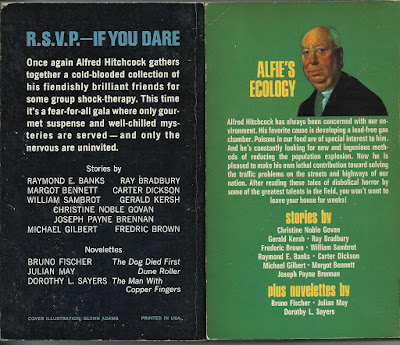 Hey All!
I’m going to start out today by misquoting Bill Murray in “Groundhog Day”.
Robert J. Arthur is not GOD, but he is a god!

Mr. Arthur is probably more responsible than any other person back in the 1950s, 60s and 70s for introducing more American children to quality horror/supernatural fiction than anyone else during this era. “Alfred Hitchcock” might be one the cover, but the choice of contents is pure “Robert J. Arthur. Mr. Arthur was a true multi talent. He wrote for the magazines, TV and Radio. He was also a meister anthologist. He is the man responsible for the classic “Alfred Hitchcock” young reader’s horror anthologies “Haunted Houseful”, “Ghostly Gallery” and “Monster Museum”.  Mr. Arthur was also the creature and original author of the “Three Investigators” series. These are all listed in one of my earliest posts if anyone is interested. Even though Mr. Arthur showed amazingly good taste in the stories he selected, his own horror stories are just a good as those anthologized. If you want a great sampling of his stories go and dig up a copy of his horror anthology “Ghosts and More ghosts”. It’s well worth it.
He was also the man who selected all of the stories in “ A Red Skel(e)ton In Your Closet - ghost stories gay and grim selected by the master of comedy, Red Skelton”.

(Correction! "Zybahn from "Casual Debris" pointed out that Mr. Arthur, to his knowledge, didn't edit "A Red skelton in your closet". This bears up. I went to the Robert Arthur listing at the "ISFDB" and it not listed under his anthologies. Neither does Mr. Arthurs daughter list it on her page. This is what happens when you read something on 2 different boards and take it a face value. MII CULPA!!)

(2nd Correction: Mr. Arthur was't the editor for "Haunted Houseful either! :-( THANKS ZYBAHN!!)

All of these are anthologies that I loved dearly back when I was in grade school. I had loaned out all of these from the “Johhny Clem Elementary School” library so often that I almost thought of them as my own property. I remember having to argue with the librarian to be allowed to borrow them. She didn’t think they were fitting for 3rd graders. Luckily I was able to convince her otherwise. I still have copies to this day of all of these books! The scans can be found in an earlier posting.
So like I said at the beginning, even though Mr. Arthur wasn’t GOD, he was a god.
And now back to “Stories not for the Nervous”
I don’t know how many “Alfred Hitchcock” anthologies there are, but it must be dozens. But Mr Arthur edited all of the early ones from the 50 and 60s. The stories are all over the place. What I mean is that so far I never seen a “pure” horror” anthology. Even though several are heavy in horror stories they usually have an even mixture of horror and suspense. “Stories not for the Nervous” is one of those horror heavy collections. I haven’t read many of the AH paperbacks, but from the few I own this one is a doozy.
Now let’s take a look at some of the stories……

“THE MAN WITH COPPER FINGERS” by Dorothy L. Sayers
This is the ONLY “Lord Peter Wimsey” story that I’ve ever read and it is a good one though. I have no idea if the others are as wicked as this one, but I’ve never forgotten it.  It’s basically a story of a missing wife and a “new” piece of sculpted furniture that shows up after the disappearance. There’s also a hidden “galvanization/metal plating” workshop in the basement. It’s fun stuff.

“LEVITATION” by Joseph Payne Brennan.
Joseph Payne Brennan is one of my all time favourite horror writers. He is also one of the last “new” writers to appear in the original “Weird Tales” magazine. I won’t give too much away on this one. All I’ll say is that you should just remember that if you ever let yourself get hypnotized at the County Fair, make sure that the Hypnotist is still around to wake you back up at the end of the demonstration. This one creeped the hell out of me as a kid when I first read it in “Hauntings: Tales of the Supernatural”. This is another anthology I constantly loaned out as a kid.

“The Dune Roller” by Julian May.
Julian May is most famous for her SF/Fantasy series “The Saga of the Pliocene Exiles“ which came out in back in early 1980s. “Dune Roller” is a suspenseful “monster” story that takes place up on the shores of Lake Michigan. This is one of the most interesting monster threats that I’ve ever read and it also has a fantastic “sense of place”.  After reading this you’ll actually believe that you’ve spent time on Lake Michigan! It was also filmed as “The Cremators” in 1972.
“To the Future” by Ray Bradbury.
“To the Future” starts out as one of Mr. Bradbury’s romanticized Mexico stories and ends up as a terribly depressing dystopian time travel story. It’s well worth reading even though it’s not your typical Bradburyesque whimsy.

Don't look behind you" by Frederic Brown..
This has to be the grand daddy of of "don't look behind you" stories.  it didn't work for me, even though I'm a Frederic Brown fan.
“The Dog Died First” By Bruno Fischer.
“The Dog Died First” is a nice little “noir” story about a guy trying to prove that his wife didn’t kill her (possible) lover. This would have made a good extended episode in “Alfred Hitchcock Presents”. What is so fascinating with this story though is its restraint. “Bruno Fischer” was an old pulp magazine “schlock meister” who wrote under several pen names. The most infamous of these pen names was “Russell Gray”.  Now here comes a little history lesson. There were dozen of pulp genres and subgenres. One of these was the “Shudder/Weird Menace” pulps. These were an odd mixture of horror and mystery. We all know “Scooby Doo”, or even “The 3 Investigators”.  The monster never turns out to be real, “It’s not a zombie! It’s old Mr. McCreedy from the abandoned amusement park!”.  Yep, that’s weird menace in a nut shell. Some apparently supernatural threat gets exposed at the end as a ploy to scare people off or to cover up another crime. In the earlier "Weird Menace” stories the girl always gets rescued before the worst happens. In the later “Weird Menace” pulps the girl, if she even gets rescued, get rescued only after the worst happens. And by worst I mean imagine Daphny and Velma getting first tortured, maimed and then gang raped by leprous Orangutans before Fred, Shaggy and Scooby save the day. No shit, I’m not making this up. These stories ended up getting banned in the early 40s. Imagine the “3 Investigators” getting caught up with the villains from the film “Hostel”.  I don’t get a stiffy from this stuff, but it does have to be read to be believed. It’s basically your grandpa’s torture porn to be brutally honest. “Russell Gray” was the most infamous author of such stories. Lots of writers in this genre such as “Hugh B. Cave” and “Henry Kuttner” refused to crank up the misogyny and sexual violence and left the genre. Bruno Fischer writing as Russell Gray had no such qualms. If your curios, John Pelan over at “Dancing Tuatara Press” has recently released “Hostesses in Hell: The selected stories of Russell Gray”.  These stories are a truly guilty pleasure. They are so awful that it helps to take the edge off of the terrible things that happen in the stories. It also helps to only read one story a month. Santa Claus brought me a copy and so far I’ve only made it through 4 of the stories. Think “Richard Laymon”, but in the 1930s.
Here are a few “Shudder Pulps” in .pdf format. Don’t say that I didn’t warn you.

THE MOLEMEN WANT YOUR EYES

FRESH FIANCE´S FOR THE DEVILS DAUGHTER

Well, that’s it for this week.