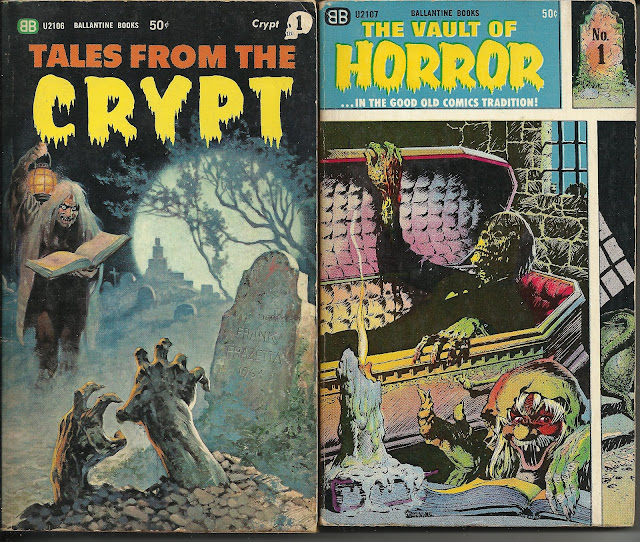 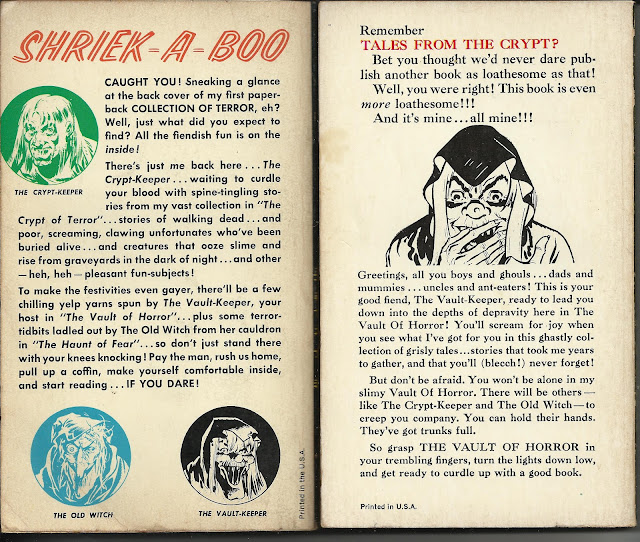 I’m in the middle of 2 weeks of vacation so this is going to be a fairly short and lazy post this week. And since I worked in the Garden all day my back hurts and I’m tired. So instead of actually presenting any literature, I’m presenting 2 paperback collections of old EC horror comics’ reprints. "Tales from the Crypt” and “The Vault ofHorror”. Back in the mid 60s Ballantine published 5 EC Comics paperbacks. The two collections covered here and two collections of Ray Bradbury Horror and SF stories that had been adapted by EC. The 5th volumes were a collection of SF stories. The series includes….

As awesome as the old EC stories were these paperback are not the best of formats to present them in. The stories are reprinted lengthwise with 2 to 4 comic panels per page. So in order to read them you have to turn the books sideways and hold them like a calendar. The black and white line drawings have been very nicely reproduced. It’s just such a bitch to handle the books in such an odd manner in order to be able to read them. So to be honest, my only true reason to even buy these two books was because they were dirt cheap and the covers are simply wonderful to behold. The Frank Frazetta cover to “Tales from the Crypt” is doubly awesome since it has Frazetta’s name and the date of publication on the pictured tombstone and this is probably Frazetta’s first horror cover painting, since it pre-dates his famous cover paintings for the Warren horror comics, Creepy, Eerie and Vampirella. Mr. Frazetta's cover for "Vault of Horror" isn't too shabby either.
According to Wikipedia, this collection was used as the basis for the old “Amicus” anthology film “Tales from the Crypt”.  Which has to be more than a coincident since all of the stories that appeared inn the film are also here in the book. All through the house” is one of my all time favourite EC stories. Who can’t resist a psycho axe welding Santa chopping up a two timing murderous slut wife? You have to give the folks from EC credit. People always got their just deserts in the EC stories!
In defence of these collections though, I have to give them credit for re-introducing the stories to a new generation of horror fans. The paperbacks were published more than ten years after EC ended their horror and SF lines and right before Jim Warren launched his line of EC inspired black and white horror comics. And the first full reprints didn’t come until the early 1970s. Printing in black and white was very important since it allowed publisher to get the crippling and emasculating “Comics Code”. This is why “Mad Magazine" is published to this day in b&w instead of in color, like it originally was back in the 1950s.

Like I said, it’s a short posting this week! That’s all! Go home!

And thanks for stopping by.