BERNHARDT J. HURWOOD,
an unsung Hero of my Childhood.

My Collection of books by Mr. Hurwood. 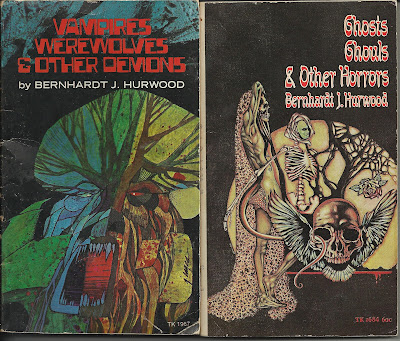 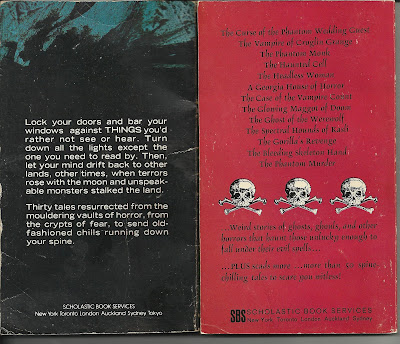 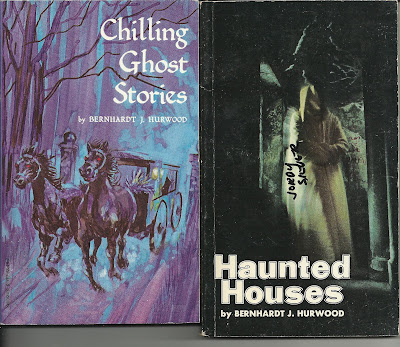 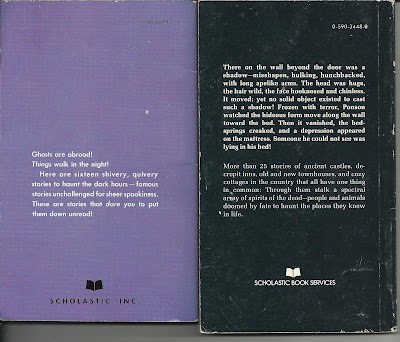 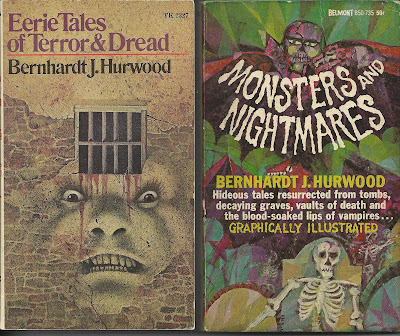 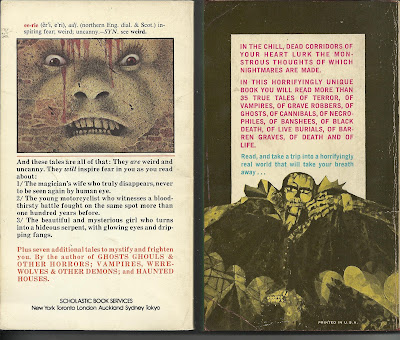 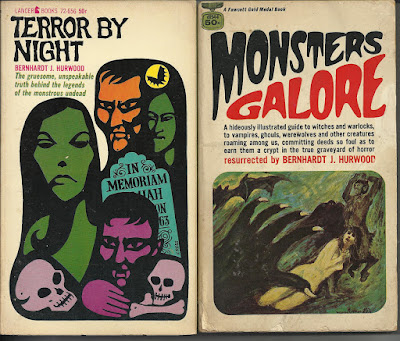 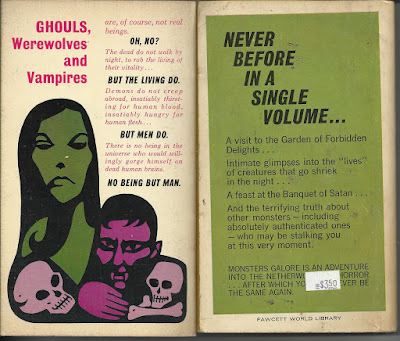 It must have been in 1970 or 71 that I realized that books without illustrations were much better than those with illustrations. Or at least a book with only a few illustrations was better than one full of illustrations. I was only 10 at the time and it wasn’t all that easy to find (young) adult horror books. Be they hardback or paperback. I had almost memorized all of the “Robert J. Arthur” edited anthologies by the end of the 3rd grade. I had received a whopping $5.00 for my birthday that year and spent it all on paperbacks at the chain bookstore in the Eastland Mall in Columbus. Those 5 bucks purchased me 10 “AceDoubles”! Being the undiscerning young man that I was, I went and picked the books purely by their covers. Sadly, while the covers were actually neat, the books were simultaneously a tad too complicated and not exploitive enough for my unrefined reading tastes. So I ended up being mighty disappointed with my picks.
This was at the time we were being introduced to the “Scholastic Book club” at school. Every few months the teacher would pass out these small 4-5 page flyers with a selection of paperbacks selected and printed by “Scholastic books”. I can’t say that I was overwhelmed by the selection. I remember it being mostly stuff like “Curious George”, Clifford the Big Red Dog” and stuff like that. As luck would have it my friend Rod, who was 2 years ahead of me, showed me the catalog/flyer that the older kids were given. Now this was the good stuff that they were keeping from the 1st-3rd graders! This stuff was more to my liking! They had “Encyclopaedia Brown”, “The 3 Investigators”, “Homer Price”, “H.G. Wells and best of all, HORROR STORIES! And not just any Horror Stories, they had “Edgar Allan Poe”,”H P Lovecraft” and “BERNHARDT J. HURWOOD”!!!!!!  Poe was too dry and Lovecraft was too trippy for my 10 year old soul, but Mr. Hurwood hit the spot, scratched the itch, tripped my trigger and blew my gaskets!
I think it’s a great shame, but Mr. Hurwood isn’t exactly a household name. He deserves to be one though. He was a writer who specialized mostly in the Occult and Erotica during the early 60s to late 70s. Several of his books on the occult were short snappy retellings of European and Asian legends of ghosts, demons and various Monsters such as werewolves and vampires. Several of the collections were cannibalized and repackaged by the Scholastic Book club under such titles as “Ghosts, Ghouls and other Horrors” and “Vampires, Werewolves and other Demons”. Now those are great titles for books being peddled to little kids! But then again this is a publisher who sold Lovecraft to children. Respect!
Now back to my friend Rod. When I saw the cool books that were available I went and begged the teacher to let me order these instead of the “little kid” books. She finally caved in and allowed me to order the older kid books.  I can’t remember which book I ordered first. It was either the “Vampires and Werewolves” or “Ghosts and Ghouls”. It didn’t matter though. I was in hog heaven regardless. Mr. Hurwood´s genius was that the retellings that he wrote were faitly short. Only 3 to 5 pages long and that they were so entertainingly disgusting that I almost went insane with glee. Here are a few excerpts from the tales…..

“Before long the town was in a state of panic. People were afraid to sleep in their own houses for fear of these nightly assaults, but nothing they did seemed to have any effect on the “vrykolakas”. Abandoning exorcisms and prayers, they took to stabbing the body with repeated sword thrusts, but this too proved fruitless.
Finally they took the body from it’s coffin, smeared it with tar and pitch, placed it atop a huge pyre, and burned it to cinders”

“Lying on its side, the corpse was ruddy and fresh looking. The hair and nails had grown long, the jaws gaped open, and the lips, damp with blood, glistened as the thick red liquid dribbled down the corners of the mouth.”

“To their horror they found a corpse inside that had the face of a living man. It’s body was covered with hideous white hair, and clutched in it’s hands was the severed head of  the unfortunate Liu. The corpse held the head so tightly that they had to chop of it’s arms in order to free it. When this was done fresh blood gushed out from the arm sockets. Liu’s head, however, was completely dry.”

“The previous occupant of the house had been a senile old man who had grown  incredibly fat. It had been a number of days after his death that he had been found, and even then, his immense size made it impossible to remove his remains without cutting holes in the doorways to permit getting him through them. When this has finally been accomplished, decay and putrification had set in to a considerable extent.”

“The rats had come! This time there was no escape. Dropping to his knees, Hatto began to pray, but his prayers were not answered. When the thousands of furry horrors him his screams were drowned out by the gnawing, the tearing, the squealing and the grinding. And by the time they had finished, there was nothing left of him but a pile of white bones.”

You can not imagine how much I loved these books. I have all 5 of his Scholastic editions and 3 regular paperback editions. Of the scholastic, 2 are original stories and 3 are retellings of traditional folk tales. The 3 volumes of retelling were mostly originally printed in “Monsters and Nightmares” from Belmont Books and “Vampires, Werewolves and Ghouls” from Ace Books. The collections with original stories are “Haunted Houses”, “Ghost Ghouls and other Horrors” and “Vampires, Werewolves and other Demons”. “Eerie tales of Terror & Dread” and “Chilling Ghost Stories” are original stories written by Mr. Hurwood.

Here is his obituary from the New York Times……

Bernhardt Hurwood Is Dead; Wrote on Variety of Subjects

Published: January 26, 1987
Bernhardt J. Hurwood, the author of 64 books on a wide variety of subjects, died of cancer Friday at Beth Israel Medical Center. He was 60 years old and lived in Manhattan.
Mr. Hurwood's most recent book was ''Writing Becomes Electronic: Successful Authors Tell How They Write in the Age of the Computer.'' His earlier works included ''My Savage Muse,'' an imaginary autobiography of Edgar Allan Poe; ''Vampires, Werewolves and Ghouls,'' ''Passport to the Supernatural,'' ''The Golden Age of Erotica'' and ''The Whole Sex Catalogue.''
Mr. Hurwood was born on July 22, 1926, in New York, and attended Northwestern University. He served one term on the board of directors of the Mystery Writers of America. He was also a member of the American Society of Journalists and Authors, the Authors Guild, the Computer Press Association and the Writers Guild of America, East.He is survived by his wife, Marci Vitous-Hurwood; and a brother, Theodore, of Pacifica, Calif.

Thank you so much for these wonderful books Mr. Hurwood where ever you are. I am in your debt for all of the wonderful hours of reading pleasure and gory fun!

And now for a little “aside”.
A few weeks ago I received a copy of “Eerie Tales of Terror & Dread” from a Canadian book Dealer through Abebooks. When my copy arrived I saw from the inscription on the title page that it was originally owned by a girl named “Roswitha  Pilz” who was in Mr. Campbell’s 5th grade class. 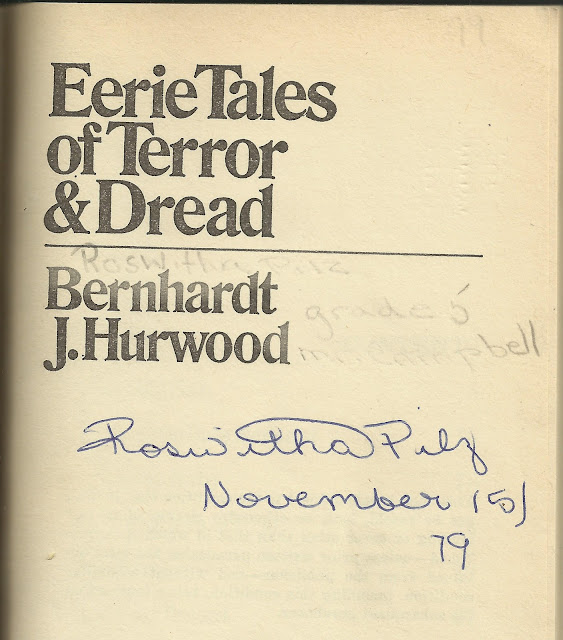 While thumbing through the book a small slip of paper feel out. At first I thought it was just a piece of paper that had been used for a book marker. I had a pleasant surprise when I turned it over! I truly hope that the girls had a good time that day almost 37 years ago.

Take care and thanks for stopping by.
Doug