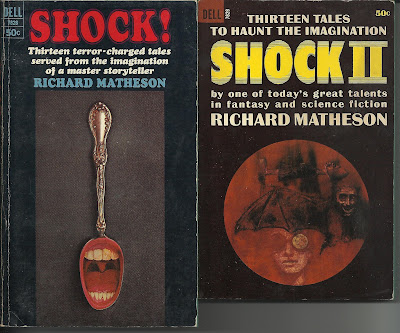 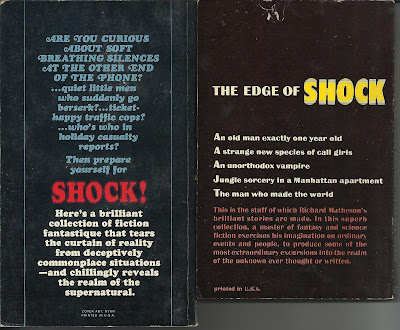 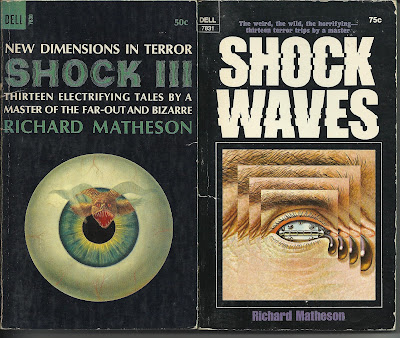 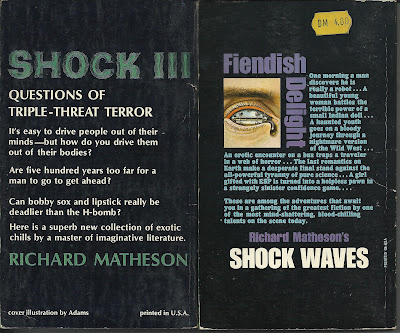 SHOCK III
“Thirteen electrifying Tales by a Master of the far-out and the bizarre”
Dell books.
March 1966. $0.75

SHOCK WAVES
"The weird, the Wild, the horrifying-thirteen terror trips by a master”
Dell Books.
1970. $0.75


Back in the 1960s Dell books published 4 collections of Richard Matheson horror and thriller stories, each of which contained 13 stories. I guess 13 seem a lot creepier than a normal dozen. As amazing as the stories are in these collections, I think that the covers are pretty uninspired. What I do like though are the 1960s flair to the blurbs of “SHOCK III” and “SHOCK Waves”. They use the words “trips” and “far-out”. I actually find this to be really groovy!

Richard Matheson, for the un-initiated, was at one time a seriously major power in the horror genre.He was also one of the last “Weird Tales” writers.  Even though they aren’t collected here in these 4 volumes, his stories “Blood Son” and “Born of Man and Woman” are/were two of the most heavily anthologized horror stories of all time. And even if his name is not so well known to younger readers nowadays, everyone who owns a television set has been exposed to the works of Mr. Matheson at one time or another. Here’s a little list.

“I am Legend”: Matheson book and screenplay (The Last Man on Earth with Vincent Price.)
“TheIncredible Shrinking Man”:  Novel and Screenplay.
“(The Legendof )Hell House”: Novel and Screenplay.
“Somewherein Time”: Novel and Screenplay.
“Duel”: Screenplay and short story.
“Twilight Zone“theMovie”: screenplay and the short story “Nightmare at 20,000 feet”
"A stir of Echoes": just the novel.
"What Dreams may come": just the novel.
And he did the screenplays to the following films…
"Comedy of Terrors"
“The Raven”
“The Houseof Usher”
“The Pitand the Pendelum”
“Trilogy ofTerror”
“Tales ofTerror”
“Burn WitchBurn!”which is the film adaption of "Fritz Leiber's" "Conjure Wife"
“The NightStalker”  (Damn right! KOLCHAK!!!"
16 Episodes for the original “Twilight Zone” series!!!!
"Real Steel" with Hugh Jackman is loosely based on Matheson's "Steel" which was also filmed as a "Twilight Zone" episode!

The late "Charles Beaumont" was on of Mr. Matheson's screenplay co-writers. Mr. Beaumont will be having his very own post in a few weeks!

These are some seriously classic films here folks!!

And the list goes on and on and on. He was a very busy man!
So even if you don’t know him you actually do know him.

Now about his stories....
What I’ve always enjoyed about Mr. Matheson’s stories is how mean they can be. In Mr. Matheson’s universe very bad thing happen to undeserving people. I also can’t seem to think of a single Richard Matheson story that doesn’t take place in the modern world. This adds to the weirdness of many of his stories. Many are out and out horror. He just eschews are the classical trappings. Many of his stories seem to be episodes of “Madmen” where things just happen to go terribly terribly wrong.  I think that Stephen king owes a lot to Mr. Matheson.

One of my all time favourite Matheson stories is “The Distributor”. It deals with a man who moves into neighbourhoods and then destroys them by turning everyone on the block against each other by using lies, innuendo, sabotage and subterfuge. This has to be where Stephen King got the idea for “Needful Things”.

We’ve all seen “Nightmare at 20,000 feet”. The story is as much fun as the TV and film version. I just love seeing this guy flip out on the airliner because a “gremlin” is dismantling the wing directly outside of his window. This story has become such an archetype that there is even a Simpson’s Halloween episode riffing on the story. That goes to show how much this story has become a part of the cultural sub-consciousness. The Simpson’s also spoofed “I am Legend (Filmed the 2nd time as “The Omega Man”) on another Halloween episode.
“Lemmings” is so simple a story that it is even more nightmarish because of this. Everyone heads for the sea shore, abandon their autos in the massive traffic jams on the freeways and continue on by foot to the beaches and just keep on walking. You can’t believe how creepy this story is.

“Witch War” is a very appropriate title. Cute idea uses teen witches in modern warfare where the US has been invaded.

“First Anniversary”, which Matheson also adapted for “The Outer Limits (new series), is not horror. Instead it’s a very sad SF story. It poses the question “What do you do when your wife starts tasting funny?”

“No Such Thing as a Vampire” is the only Matheson story I can think of that uses a demi-gothic eastern European setting. A nice Dr. is married to a nice vampire lady and needs the help of his fiend (her “ex”-lover) friend to trap the vampire. The story has a wonderful “worm turns” cuckold’s revenge twist ending.

I truly wish that I was good enough of a writer to put into words how amazingly good these stories are! Mr. Matheson’s style of writing is that he has no “style”. I mean that his stories and how he uses words are bereft of decorations and show offiness. There is none of that “look at me! I’m writing!” in his stories. This matter-of-factness makes them that much more effective. The man is a true giant and even though his stories and films are so iconic and famous it seems that many readers have no idea that these are all “Richard Matheson stories”.
And that is an honest to god crying shame!
Mr. Matheson is a winner of "The World Fantasy Award" and a member of the "Science Fiction Hall of Fame"

Luckily he is still in print and even better, he’s still alive!!!

GO TO AMAZON AN BUY HIS WONDERFUL BOOKS!!!!
You won't be sorry! Trust me! would I lie? No I wouldn't! and if you think that i would, then you don't know me very well!

Thanks for stoping by!
But before you go, check out these Richard Matheson film clips!

TAKE CARE!!! Come Back next week!