The War of the Worlds and Halloween!

The War of the Worlds and Halloween:
Two great tastes that taste great together!

One of the few things that I love as much  Halloween is H. G. Wells' The War of the Worlds.

I can't quite remember when I first became aware of those far flung Martian cylinders that were filled to the brim with towering tripods that dealt death and destruction as they spewed heat rays and poison gas across the width and breadth  the Victorian  British country side. But I can honestly tell you that I became aware of the Martian invaders at an extremely young age.

One if my earliest memories is from when we were still living in . I clearly remember sitting on the sofa watching that unfortunate trio waving a flour sack that they had tied to a shovel handle in an effort to make friends with the passengers of he crashed Martian carrying meteor.  Watching them get reduced to a pile of human shaped ash scared the living shit out of me. It won't surprise me in the least if I die a few years earlier because of it.

Jump ahead a few years to what must have been Halloween 1969. We were living in by then and "Nerk" had an odd tradition. Beggars Night was always on the 30th and not on the 31st like you think it would have been.  It could have been that the town's fathers knew something that us kids didn't, and had decided that it was safer for us to be off the streets on that most special night of nights instead of wandering around in our fireproofed nylon costumes with those sweaty masks. The masks that had the too tiny eyeholes and were held on by a fragile rubber band. 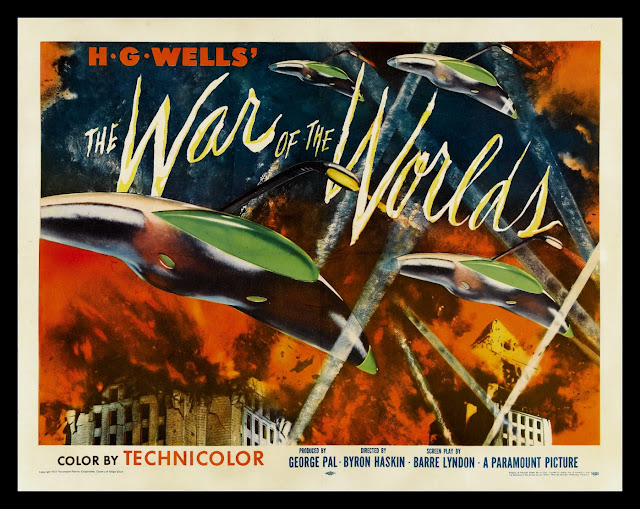 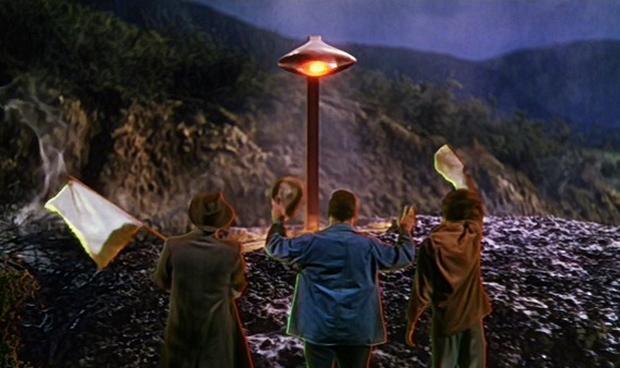 These guys are toast!


Jump ahead a few years to what must have been Halloween 1969. We were living in by then and "Nerk" had an odd tradition. Beggars Night was always on the 30th and not on the 31t like you think it would have been.  It could have been that the town's fathers knew something that us kids didn't, and had decided that it was safer for us to be off the streets on that most special night of nights instead of wandering around in our fireproofed nylon costumes with those sweaty masks. The masks that had the too tiny eyeholes and were held on by a fragile rubber band.

It turned out that this odd system wasn't as bad as it sounded. WCLT, one of the local FM radio stations always broadcast a "Halloween Radio Spooktacular". Yes, they actually called it that. And this was a wondrous thing indeed! 5 hours of old time radio horror shows such as "Lights Out" and "The Inner Sanctum" to name a few. And it always culminated with a replay of Orson Wells' Mercury Theater production of "The War of the Worlds".

Hearing that faux reporter describing the massive three legged war machine rising from the pit created by the falling cylinder set my brain of fire.
I was enthralled by the entire episode even though the switch in the middle to a normal radio drama format was a disappointment. I still loved it. The announcer describing the  mass of black poison gas making it's way across are it steadily approached the studio almost pushed over the edge in a rush of ecstatic horror. I can still remember running down stairs and looking out onto the front porch to make sure that the poison gas wasn't flowing up the front steps. Even though I knew that the broadcast was decades old and fake, I figured that you couldn't play it too safe with stuff as serious as Martian poison gas. 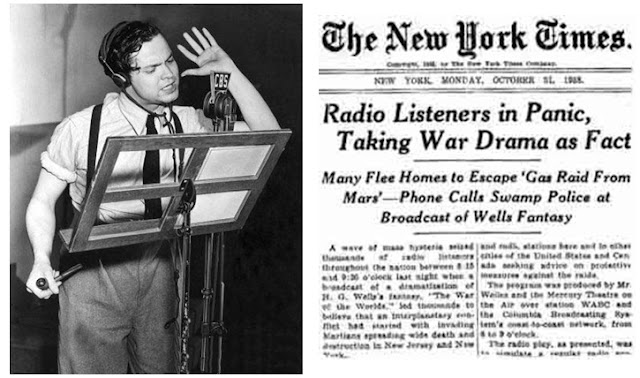 I can still smell the poison gas lapping against our front porch steps! 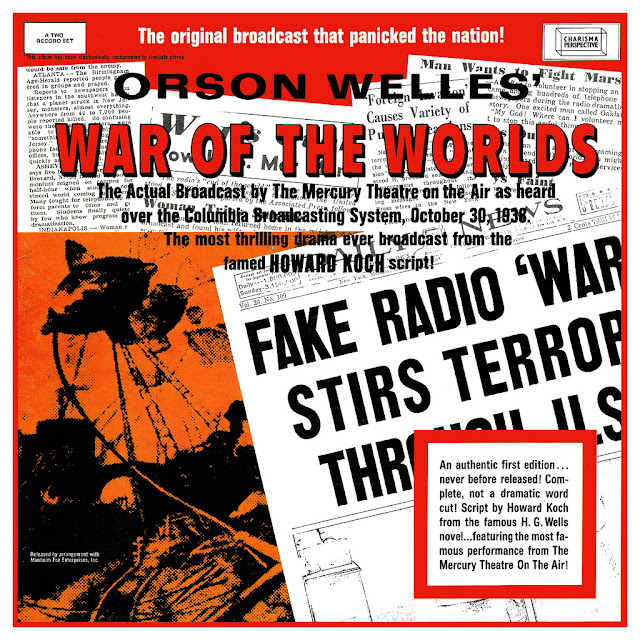 Ordered from the back of Famous Monsters!


It wasn't much later when I discovered the "Classics Illustrated" edition of The War of the Worlds.

I probably read the damn thing to pieces within a few weeks and set about on my quest for to find the actual novel. 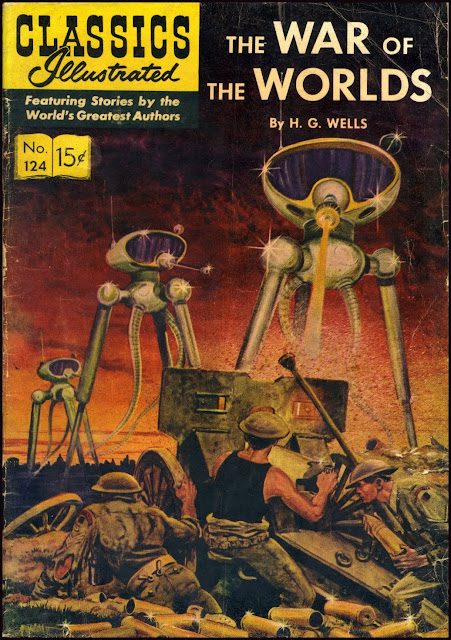 Classics Illustrated #124 feed the flames of my Obsession!

I can't remember how long it took, but I began scouring every paperback rack that I came within reach of with a passion. that crossed over into obsession. I couldn't talk about anything else. I must have drawn scores of flame throwing tripods in Mrs. Gerlach's third grade class. This moved her to making the comment to my parents that I was a peculiar child.  It must have taken a few months, but I finally came across the "Berkley Premier" edition of  "The Time Machine & The War of the Worlds".

This edition was  sold under the banner "Isaac Asimov Presents".  Back then, I hadn't the foggiest notion who or what an Isaac Asimov was.  This edition also sported one of those trademark abstract Paul Lehr covers. A cover that, even after almost 45 years, I have never tired of looking at.

Anyways, The War of the Worlds is a novel that I return to every few years.  And even though it's Science Fiction with a massive dose of  not so subtle social commentary, I feel that what with  masses of people being burnt, scalded, crushed alive, plus having their blood drained by lipless octopoid Martians, that it qualifies as horror. And this is why it has become an integral part of my Halloween.

I'm going to cut this short. It's the 30th and I need to get my Pumpkins carved!

So take care, thanks for topping by, and don't let those ghosties, ghoulies and long leggedy beasties get you! 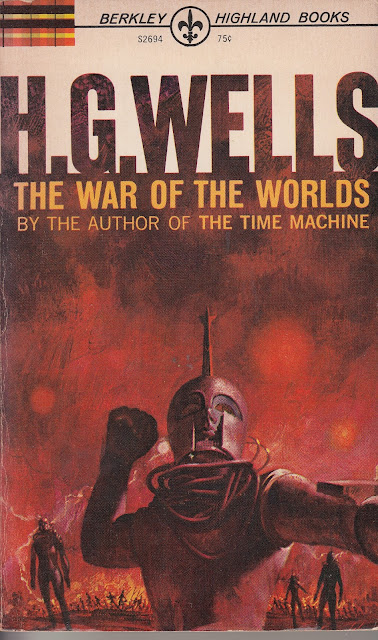 My May 1964 Berkley edition with a nice Paul Lehr cover. 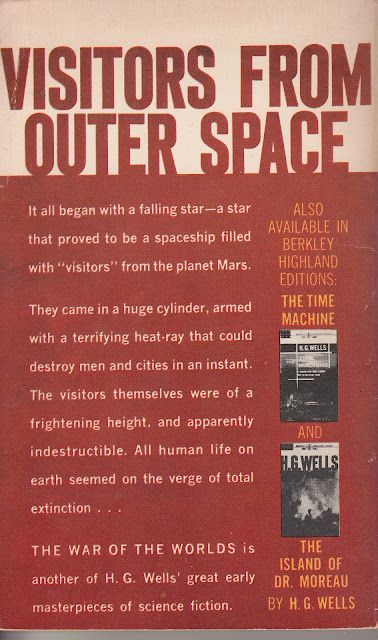 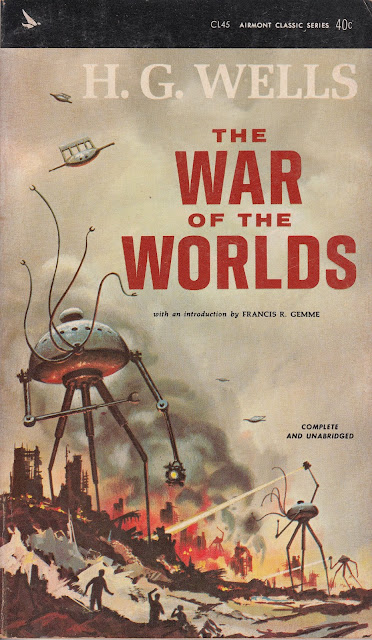 My 1964 Airmont edition with uncredited cover art.
This is the only cover that I know of where the Martian flying machines are also included.
The Airmonts were known for being the editions sold by Captain Company in the ads at the back of Famous Monsters of Filmland. 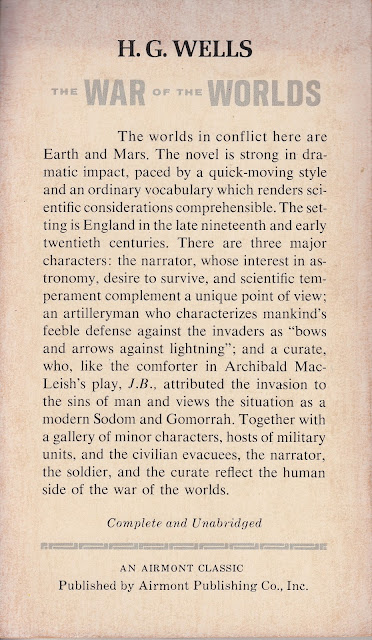 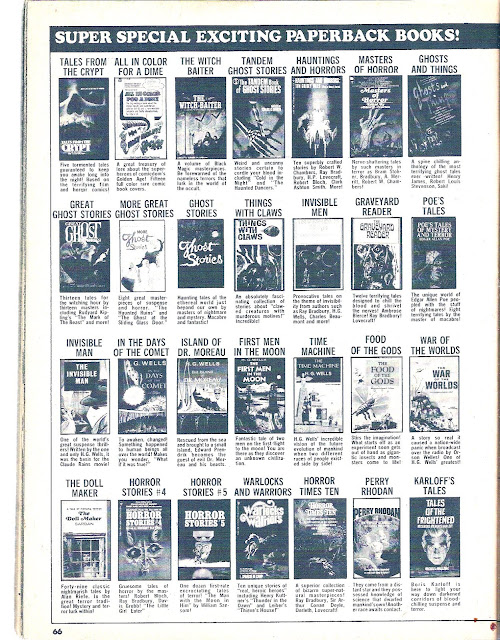 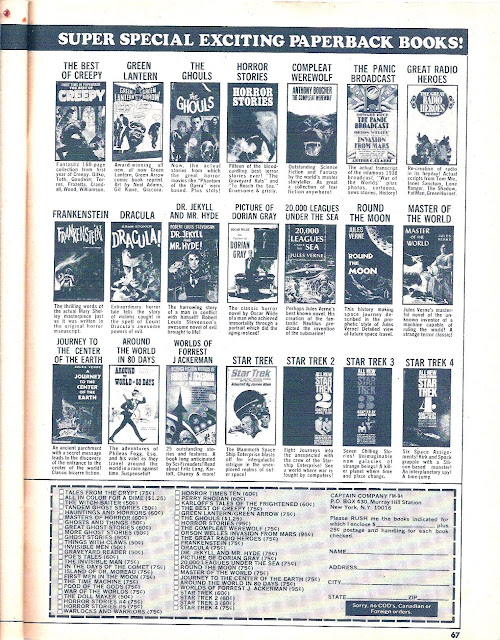 Two pages of Paperback ads from the back of Famous monsters with th airmont editions. 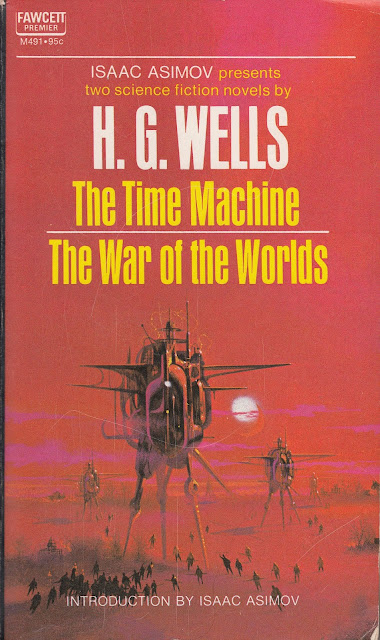 My copy of the 1968 Fawcett Premier edition with another stunning Paul Lehr cover.
This is it!
This is the first book that I ever purchased with my own money!
I can look at this cover for hours and never get tired of it. 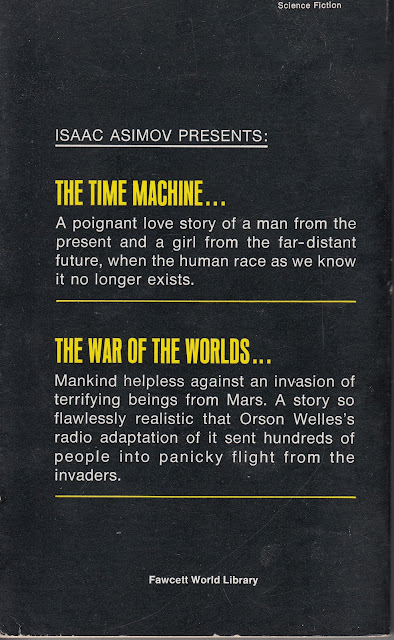 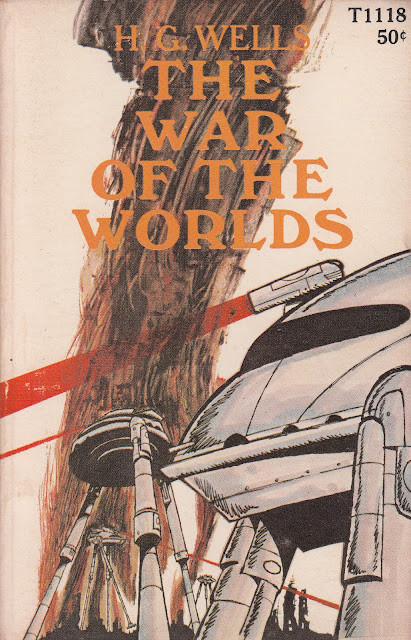 My August 1968 Scholastic edition 3rd printing.
I'll never get tired of saying this, but God bless the Scholastic Book club! 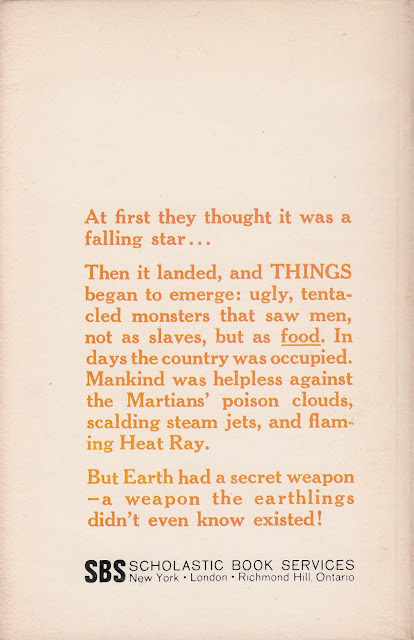 The back of the 1968 Scholastic edition. 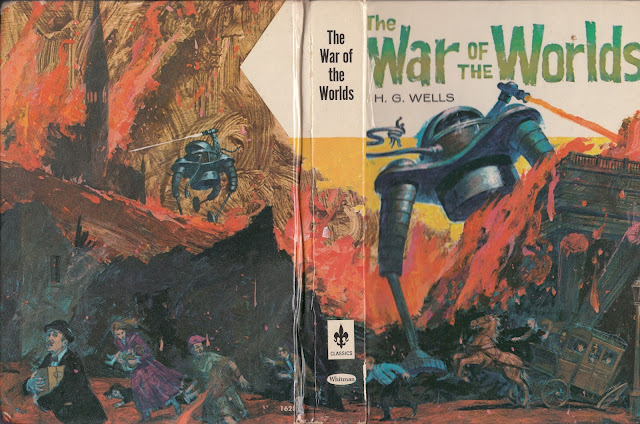 My 1964 Whitman Hardback.
I know, not a paperback.
But I love this edition dearly and will never ever forgive Mike Franga for not loaning me his copy back in Mrs. Gerlach's third grade class at Johnny Clem Elementary School in 1971!